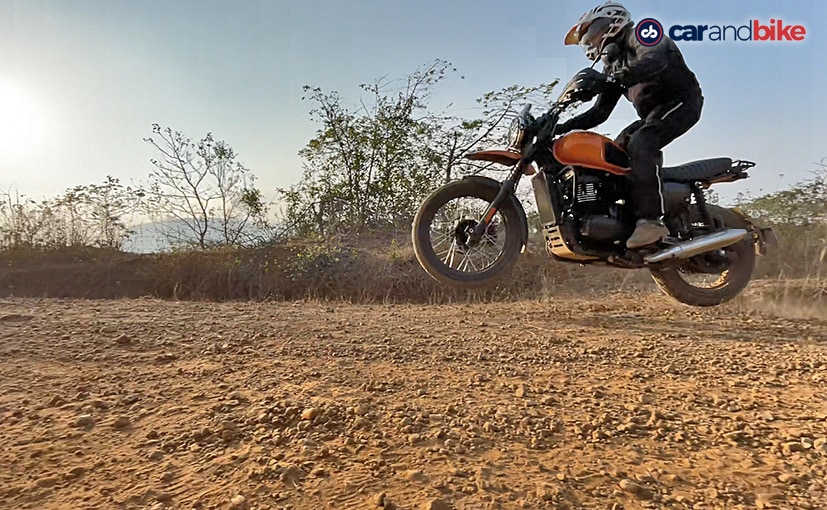 Perception sometimes can be a double-edged sword. This statement can’t be further from the truth when choosing a motorcycle that suits your needs. Sometimes, the lines blur between needs and wants. That could almost be the case with the new Yezdi Scrambler. As things stand today, the Yezdi Scrambler has no real rival, and it’s the most affordable scrambler-styled motorcycle on sale in India right now. The Yezdi Scrambler may look affordable, but the profile of its target customer varies between someone who will be looking for a do-it-all motorcycle, to someone who needs a second or alternate bike for pure entertainment and short dashes in and around town, or the nearest trails.

Also Read: Everything You Need To Know About The Yezdi Scrambler

The Yezdi Scrambler is designed for mild off-road duties, and has that cool, modern classic vibe, while looking like a true-blue factory custom.

In my book, the Yezdi Scrambler is designed for the latter chunk of would-be buyers, designed to be an accessible and fun bike, for mild off-road duties. And it retains that cool, modern classic vibe, while looking like a true-blue factory custom. But is it as good as it looks? And will it serve your needs as a motorcycle buyer, or will it be just a case of wanting to own a motorcycle that makes a style statement rather than meet any real purpose that is designed for? We spend a couple of hours trying to decode what the Yezdi Scrambler is all about, and the experience left us wanting for some more seat time.

Also Read: Everything You Need To Know About The Yezdi Scrambler 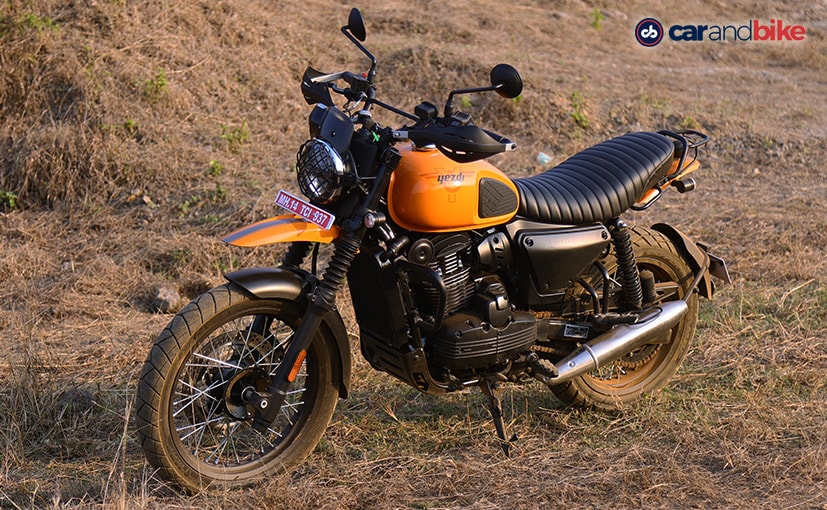 The Yezdi Scrambler has a minimalistic, stripped-down design, and will appeal to those looking for a fun machine.

The Scrambler has a minimalistic, stripped-down look. The round headlight, teardrop-shaped fuel tank and wire-spoke wheels underscore its neo-retro design. The high-mounted beak, tall and wide handlebar, as well as the ribbed single-piece seat all ooze retro scrambler appeal. The tail section looks chopped off, and the Scrambler also employs a different rear subframe than the other Yezdi bikes. Overall, it looks striking, although to me, the rather minimalistic tail section design could have been improved to suit the proportions of the muscular front section. 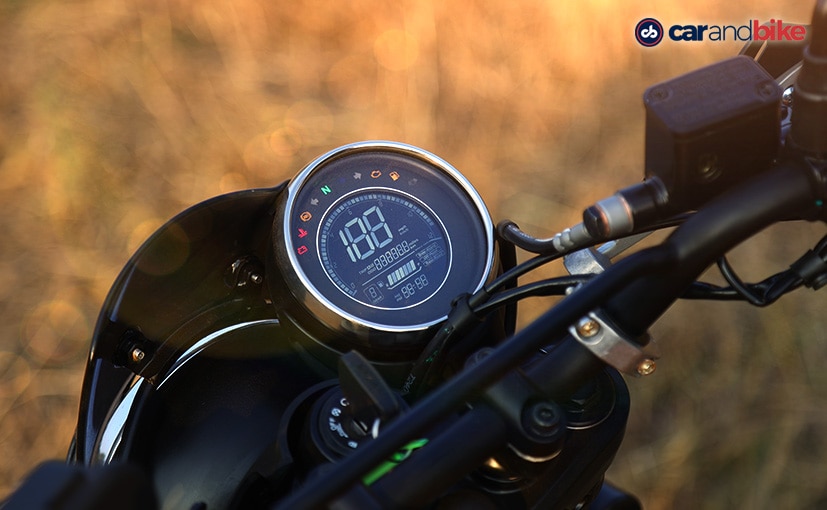 The single, round and off-set instrument console is LCD, and is shared with the Roadster and Adventure. The Scrambler also gets three-level ABS, like the Adventure.

The instrument console is the same round LCD unit shared with its siblings. But on the Scrambler it is positioned off-set, and somewhat reminiscent of the Ducati Scrambler’s single-pod instrument console. Lighting is all LED, and like the Adventure, the Scrambler also gets handlebar-mounted USB and Type C charging points, for the ease of juicing up gadgets while exploring trails. 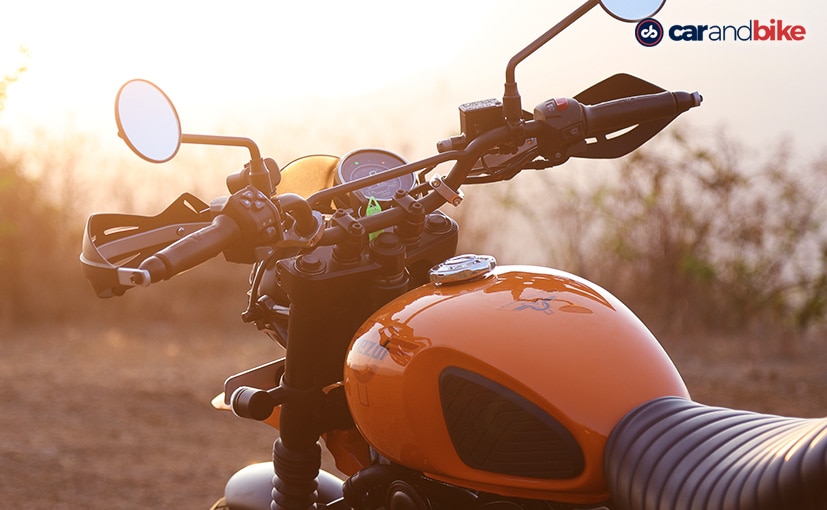 The flat, wide handlebar offers a good riding position, and offers good leverage, whether on tarmac or off it.

Also like the Adventure, the Scrambler gets three-level anti-lock braking system (ABS), with Road, Off-Road and Rain, with Off-Road switching off ABS on the rear wheel, and Rain mode being the most intrusive, to aid in slippery road conditions. 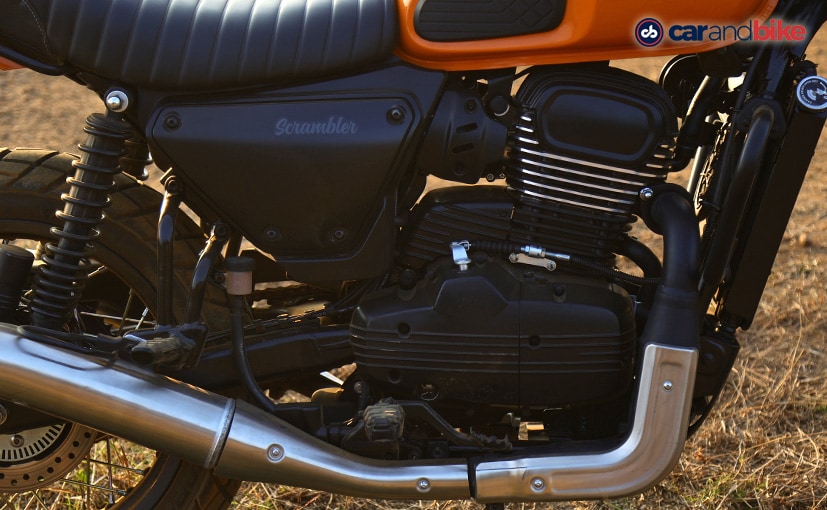 The Scrambler’s engine has been tuned for the least power and torque, but the flat torque curve makes it feel quick and eager.

The engine is the same 334 cc, single-cylinder, liquid-cooled, double overhead cam (DOHC) unit derived from the Jawa Perak. But it has been significantly updated, with a new piston, connecting rod, balancer shaft and updated crankshaft. The valvetrain has also been changed with updated camshaft and valve lift. On the Scrambler, the 334 cc engine has been tuned to make 28.7 bhp at 8,000 rpm and 28.2 Nm of peak torque at 6,750 rpm, the least output amongst the three Yezdi models. 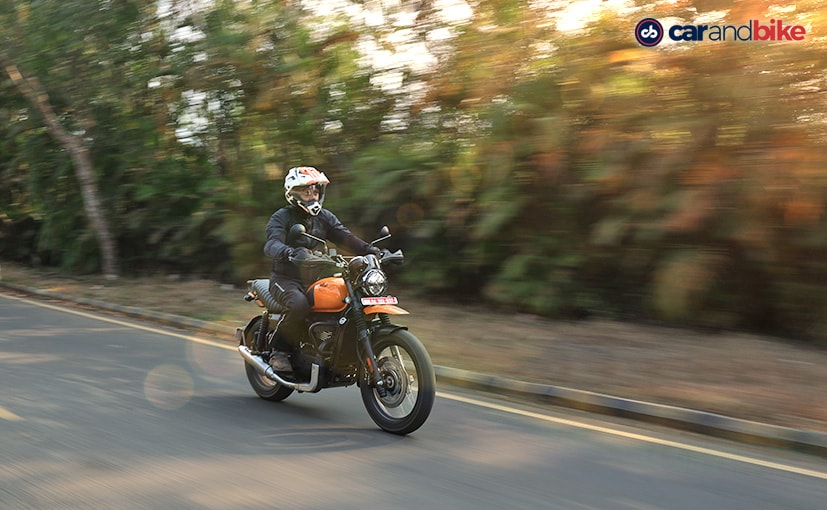 The power and torque spread on the Scrambler is linear; acceleration comes strong and eager, and it will rev all the way to the redline. Acceleration in second and third gears is strong and it hits 90-95 kmph quite quickly.

But the torque kicks in earlier than the Adventure and the Roadster and remains higher till the mid-range, around 5,500-6,000 rpm, hitting the peak at 6,750 rpm and then tapering off at 8,000 rpm. The power spread is also linear on the Scrambler, climbing with the revs, all the way to 8,000 rpm. But it isn’t all smooth sailing, at higher revs, there are some vibes to be felt, upwards of 5,500 rpm, on the footpegs, and on the seat. But it’s something which you can learn to live with, and not a deal breaker in any way. 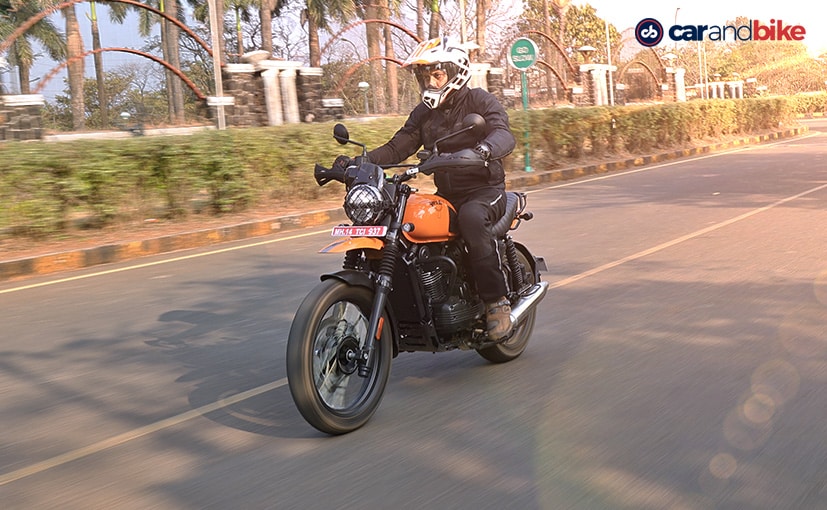 The Yezdi Scrambler has a meaty exhaust note; the punchy motor makes for an eager and compact bike, which is fun, both on tarmac, and off it.

The way the torque and the power has been spread on the Scrambler’s engine makes all the difference in performance. At idle, the Scrambler makes a throaty sound from the twin exhausts, and I have to admit, it’s the best sounding amongst the three new Yezdis. Slot it into gear and throttle response is crisp and urgent, without being abrupt. 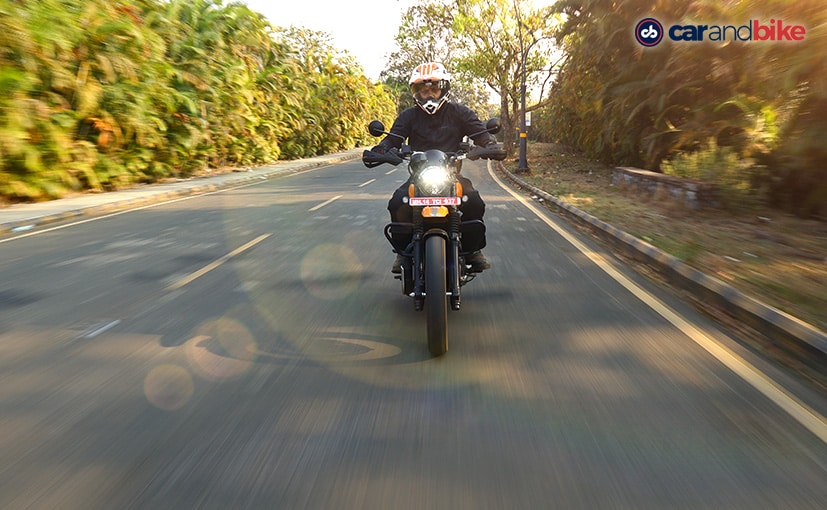 The suspension is on the firm side, and you can feel edges of broken terrain and potholes on tarmac. The engine, while being eager, also makes the rider feel the vibes on the footpegs and the seat at higher revs.

The torque kicks in nice and strong, and there’s ample pull from low revs, right up to the redline, making the Scrambler feel eager to be hustled around in stop-go conditions. Acceleration in second and third gear is brisk and strong, and by the time you hit fourth, you will already be nudging triple digit speeds. The brakes offer confident stopping power, as well as enough and more bite to shave off speeds in a hurry. 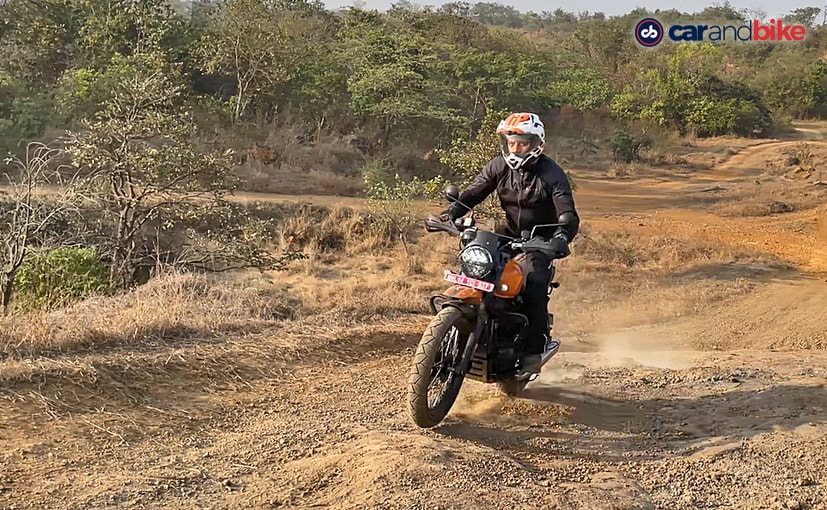 Photo Credit: The suspension may be on the firm side, but it’s not something which is a deal breaker. If it’s plush comfort you’re looking for, the Yezdi Scrambler is not the bike for you.

The Scrambler’s suspension is set up on the firmer side. It’s got more travel than the Roadster, but less than the Adventure, with 150 mm front wheel travel, and gas-charged twin rear shocks with 7-step preload adjustability and 130 mm travel. The preload on our test bike was set up somewhere in the middle. The suspension though still feels firm and stiff. When going over broken patches, and potholes, you can feel the edges of the road imperfections, including speed breakers. On our short test ride on tarmac, it didn’t prove to be too much of a bother, but for someone looking to venture out on longer journeys, the firm suspension may certainly need some getting used to. 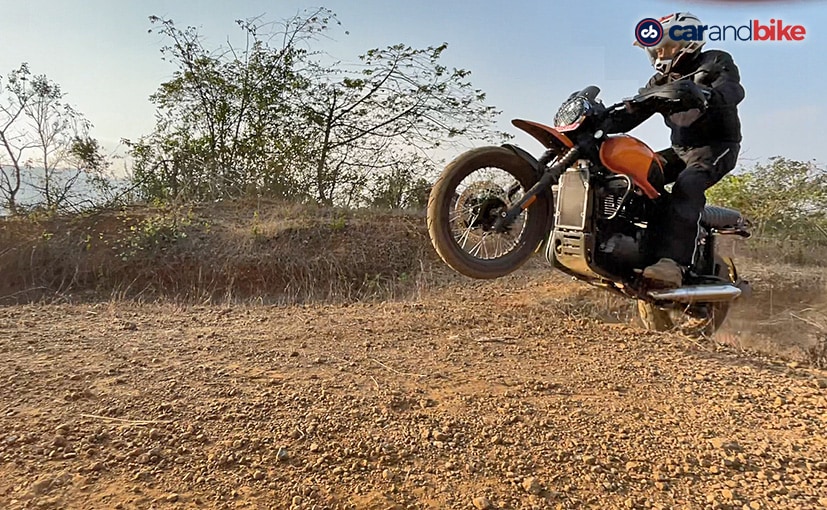 Off-road shenanigans are where the Scrambler comes into its element. Its relatively light weight, short wheelbase, and punchy low-end performance combine to make for an entertaining experience.

With a weight of 182 kg (without fuel), the Scrambler is the lightest among the three Yezdis, and it also has the shortest wheelbase (1,403 mm). Dynamically, it feels the most planted and the most agile, and the tall and wide handlebar offers good leverage for quick direction changes, whether on tarmac, or out on the trail. The 19-inch front wheel and 17-inch rear wheel may not have actual ADV creds, as well as the slightly limited suspension travel, but it’s more than enough for light off-road work, and for some fun sliding around in the dirt and small jumps. In all, the Yezdi Scrambler offers a fun and accessible package, which can prove to be quite an entertaining companion, depending on what you seek from it, everyday practicality, or just pure, unadulterated fun. 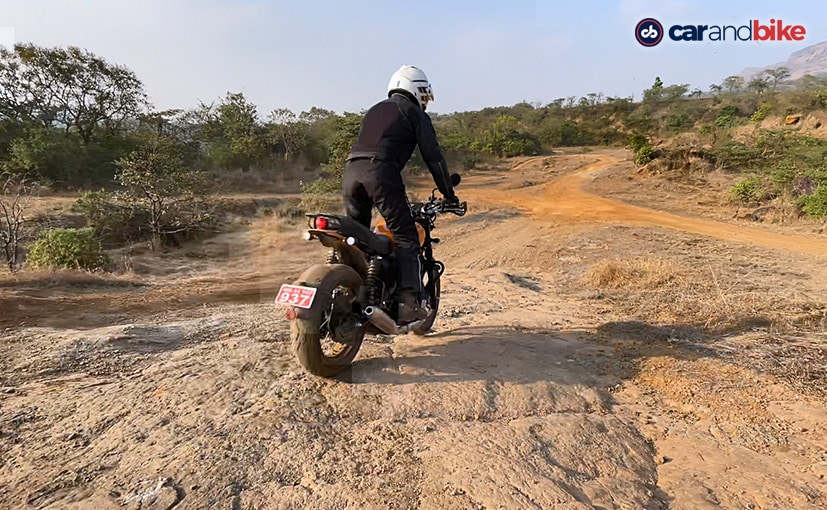 The Yezdi Scrambler is the most-affordable scrambler-styled motorcycle on sale right now, and has no real rival yet.

The Yezdi Scrambler is the most affordable scrambler-styled motorcycle available on sale right now, and there’s no taking away that novelty. The engine has been tuned for low- and mid-range performance, and that makes the Scrambler feel eager and fun. The upright riding position and lack of any wind protection may be a spot of bother on a long-ish outing on the highway. And the short wheelbase, as well as the rather scarce real estate on the seat may mar prospects of any real comfort for a pillion rider. Are these something that one may “need” in his or her motorcycle? Or does one “want” a fun package, which will possibly be used on weekends, and sometimes as a second, run-around motorcycle? 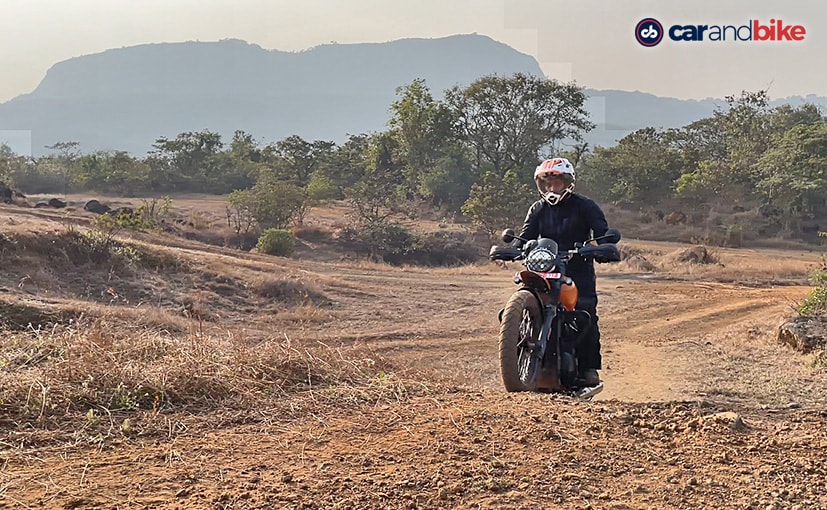 For someone looking for a fun and entertaining package on two-wheels at a budget, the Scrambler probably makes for a very strong case.

That is where the Yezdi Scrambler fits in the scheme of things. As a do-it-all motorcycle, it may not be perfect, and have its flaws. But for someone looking for a fun and entertaining package on two-wheels at a budget, the Scrambler probably makes for a very strong case. With its compact size, upright riding position, and punchy motor, it’s the Scrambler which makes the strongest impression amongst the three new Yezdi motorcycles. 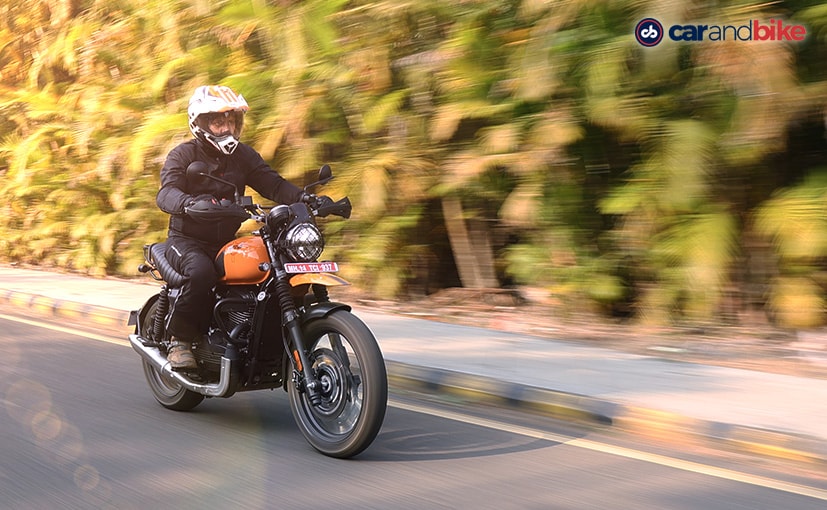 The Yezdi Scrambler deserves some more seat time, on tarmac and off it. It may not be the perfect motorcycle, but it certainly makes for a fun package.

On the day of our first ride, I got to ride the Scrambler at the end; the sun was racing towards the horizon, and after a day of riding around mostly on the off-road trail, exhaustion had set in. But the Yezdi Scrambler sure made me want to spend some more time with it, both on tarmac and off it. Is that a good sign, or will it throw up facets of it which I may not like about it after all? Packing up after the shoot, as I headed back to base, it struck me. 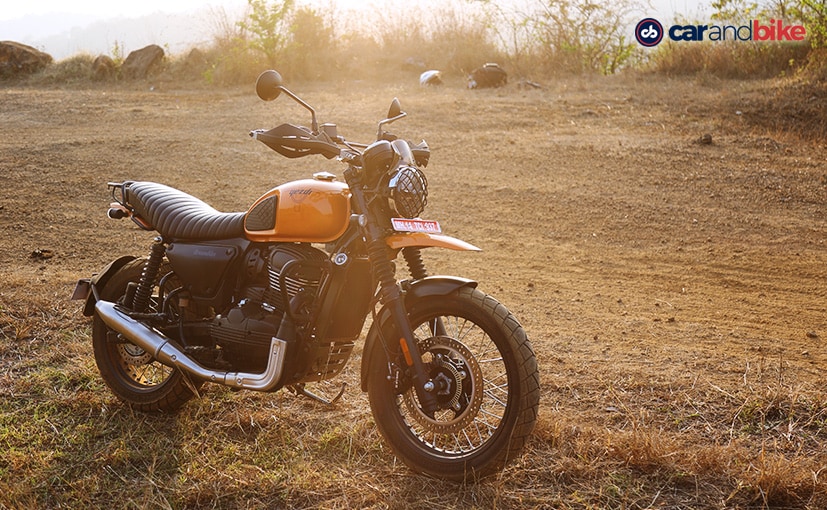 The Yezdi Scrambler certainly makes for a positive first impression. As a motorcycle which makes you want to take it for one more spin, certainly deserves credit. It has its shortcomings, but if fun is what you’re looking for, the Scrambler has the capability to put a grin on your face.

A motorcycle which makes a positive first impression definitely deserves more saddle time. And a motorcycle which makes you want to take it for one more spin, or two, certainly deserves a test ride, whether you end up buying it or not. If you’re looking at the Yezdi bikes, do take a test ride of all three, and then decide for yourself. What you want and what you need in your next motorcycle could make all the difference in your buying decision. As for me, I want to go scrambling, all over again!