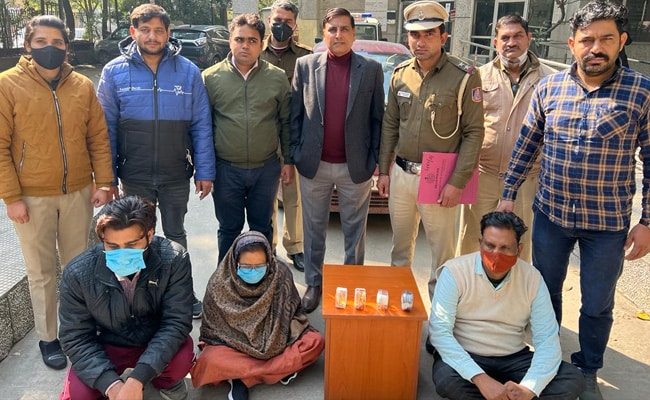 Delhi: Police said the accused’s role in previous cases is being looked into.

Three persons were arrested in Delhi for allegedly duping people by posing as followers of a spiritual guru and assuring them of solving their problems, police said on Saturday.

Investigation began after a woman lodged a complaint at the Rohini South Police Station, saying her valuables had been stolen and she had been cheated by some people, they said. The complainant said that on Tuesday, around 12:15 pm, she was approached by a man who was looking for an address.

According to the victim, suddenly, a woman also reached and claimed the man was a follower of “Radha Swami” and had solutions to problems, a police official said.

The complainant believed them and they took her to a park where she was asked to take off her gold bangles, ring and ear rings, the official said, adding that the accused kept the jewellery in a handkerchief.

According to the complaint, the accused switched the handkerchief containing the ornaments with another containing bangles made of iron.

The victim made the discovery that her jewellery had been stolen after she opened the handkerchief containing the iron bangles the following morning, the official said.

The accused had asked the complainant to keep the handkerchief under her pillow while sleeping and only open it in the morning, the official said.

Love Kumar (50), a resident of Delhi, and Ashu Arora (24) and Rajni Arora (62), both residents of Ludhiana in Punjab, have been arrested, police said.

During investigation, police checked footage from several CCTV cameras and found that the accused had come in a red car.

Police ascertained the last four digits on the car’s registration plate and obtained details from the road transport office, the official said.

On Friday, the car was found parked near Kumar’s house and later, a trap was laid. Around 10:30 am, the three persons came and when they sat in the vehicle, they were apprehended, the official said.

They have confessed that on Friday they were going to Gurgaon to commit an offence of a similar nature, police said.

The accused said they had cheated people in Haryana, Punjab and Rajasthan, they said.

Their role in previous cases is being looked into, the official said.

Rajni Arora is the maternal grandmother of Ashu Arora. His parents died when he was a child and he was brought up by Rajni Arora, police said.

Two gold bangles, a pair of gold ear rings, one gold ring, among other items, have been recovered from their possession, they added.