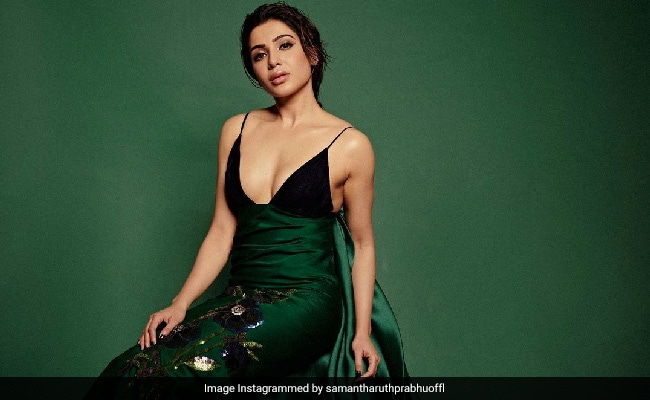 Samantha Ruth Prabhu is one of the names that doesn’t need an introduction. Agree, right? She always takes the Internet by storm. Be it her fashion picks or lifestyle goals, everything is a hit on social media. With the release of Pushpa: The Rise, Samantha became the talk of the town. reason? Her sizzling dance number. Samantha and Allu Arjun’s on-screen chemistry in Oo Antava left everybody spellbound. We couldn’t help but admire her beauty and grace. In short –  Samantha’s moves went viral. But did you know this wasn’t the first time when Samantha went viral? If not, then take a look at a few instances.

Samantha Ruth Prabhu made heads turn in a dark green number by Gauri & Nainika. But then she had to face trolls who questioned her pick.  The actress came back with these words, “Now that we’re in the year 2022 – can we finally stop judging a woman based on the hemlines and necklines she adorns and focus instead on bettering ourselves?” She added, “Turning that judgement inward and training it on one’s own self is evolution. Projecting our ideals on someone else never did anyone any good. Let’s gently rewrite the way we measure and understand a person”

Words fall short to describe Samantha Ruth Prabhu’s stellar “sexy” performance in this song for the Allu Arjun movie Pushpa: The Rise. Didn’t we tell you how big a hit the song was? Well, Samantha has something to say about her performance. Her comment left us in awe. She posted a still from the dance video and wrote, ” I played good, I played bad, I was funny, I was serious, I was a chat show host too. I work really hard to excel at everything that I take up …but being sexy is next level hard work….phew.”

The celebrity couple had announced separation in October 2021 and sent the film industry abuzz. They jointly released a statement, “To all our well-wishers. After much deliberation and thought Chay and I have decided to part ways as husband and wife to pursue our own paths. We are fortunate to have a friendship of over a decade that was the very core of our relationship which we believe will always hold a special bond between us. We request our fans, well-wishers and the media to support us during the difficult time and give us the privacy we need to move on. Thanking you for your support.”

Samantha Ruth Prabhu simply left us dazed with her striking performance as Raji in the web series Family Man 2. News of her victory at the Indian Film Festival of Melbourne did not go unnoticed. Her post soon went viral among fans.