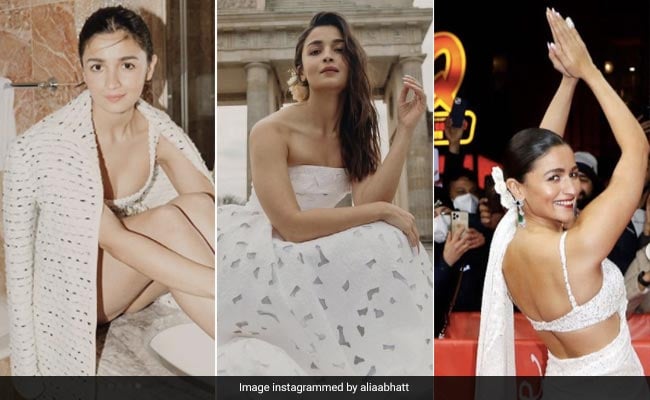 Some of the outfits Alia wore in Berlin. (courtesy: aliaabhatt)

Alia Bhatt, who awaits the release of Gangubai Kathiawadi, has been actively promoting her film. Back home, Alia was making back-to-back public appearances in stunning sarees (all of which were in shades of white BTW). Earlier this week, the actress checked into Berlin for a film festival, where Gangubai Kathiawadi premiered. While the dominance of the white colour palette remained constant in Berlin too, Alia did make up for it by switching her looks from ultra-feminine to androgynous and glam-Goddess, within a span of a few days. Here’s a round up of all the looks she sported during the film fest and otherwise in Berlin.

Flowy And Floral All The Way

Alia Bhatt’s love for floral accessories was evident in most of the looks that she sported. When the actress checked into Berlin, she dropped a set of stunning pictures. She picked a flowy dress from the shelves of Dolce&Gabbana, accessorised her hair with flowers of course and kept her make-up minimal with rosy cheeks, tinted lips and lots of mascara. “Berlin Baby,” she captioned the post.

For Day 2 of the Berlin Film Fest, Alia Bhatt picked an ivory blazer, which she paired with flared pants. The look was a perfect amalgamation of androgynous and delicate. The outfit was by Nobi Talai. She added an edge to the look with drop earrings. The make-up was minimal and the results were fabulous as ever.

Alia Bhatt did the Gangubai Kathiawadi pose on the red carpet and the results were stunning. The actress, who has been doing the backward Namaste pose at almost all her public appearances lately, did it again. This time on the red carpet, dressed in a pristine white silk chiffon saree from Rimple and Harpreet Narula’s label. Alia had her hair tied immaculately in a bun and flowers placed around it. Picture-perfect is the word.

When Alia Added Bling To Berlin

Alia Bhatt said “Bye bye Berlin” in style and how. She shared the final leg of photos from her Berlin workcation on Friday and wow. The actress managed to click some stunning shots indoor. On the couch, in the bathtub, to be precise but let’s just agree, Alia Bhatt can find the perfect spot to take pictures anywhere. Her pick for the day, in terms of outfits, was a classic little white dress with a blazer by Giambattista Valli.

Work duties aside, Alia Bhatt’s casual outfit was (no points for guessing), white too. She posted a video, also featuring sister and author Shaheen Bhatt, in which she can be seen dressed in a white turtle neck top. This was super fun. Pick a partner. Grab a deck of cards … Pick your card, kiss your card and then show your card. Highest card wins! Go go go,” she wrote, adding the song Jab Saiyaan from her film.

Which look did you like the best? Let us know using the comments section below.