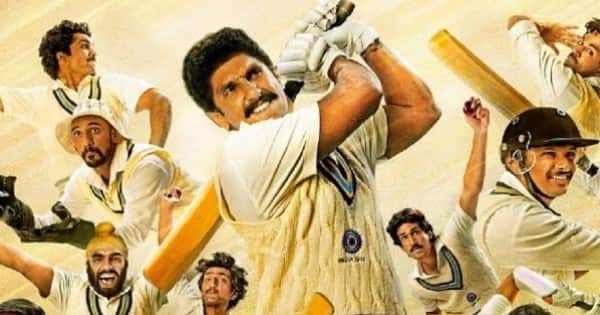 Kabir Khan‘s directorial 83 is now streaming on digital platforms after its world television premiere. The storyline of the film is based on the Indian cricket team’s maiden ODI World Cup victory in 1983. The movie stars Ranveer Singh as Kapil Dev and Deepika Padukone played the role of Kapil Dev’s wife Romi Bhatia. The film was released in theatres on December 24. After three months of its release on the big screen, the movie has finally been released on digital platforms. 83 is streaming on Disney+ Hotstar and Netflix India. The film was made available for streaming at 12 am on Monday, March 21 on both the OTT platforms without any announcement. Also Read – Project K: Amitabh Bachchan’s role from Prabhas-Deepika Padukone starrer REVEALED

Disney+ Hotstar took to its Twitter handle and shared the news by writing, “Are we in a stadium coz we can hear fans cheering! #83 is now streaming in Hindi, Tamil, Telugu, Kannada, and Malayalam. #83onHotstar”. But, Netflix did not make any official announcement about the movie release. Also Read – Pathaan: Deepika Padukone shows middle finger to paps while chilling with Shah Rukh Khan [VIEW PICS]

Are we in a stadium coz we can hear fans cheering! ?
#83 is now streaming in Hindi, Tamil, Telugu, Kannada and Malayalam. #83onHotstar

Kabir Khan’s film 83 did not perform well at the box office as, after its release, the theatres across the country had begun to shut down due to a sudden increase of COVID-19 cases. Well, as Ranveer’s sports drama is now available on both OTT platforms his fans would love his performance as Indian cricketer Kapil Dev.