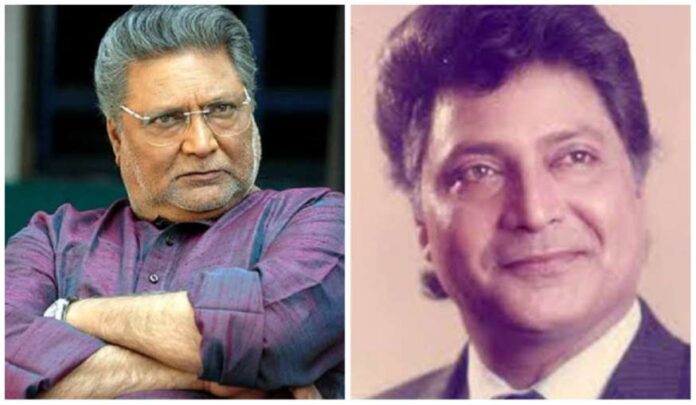 Veteran actor Vikram Gokhale, 82 years old, after the news of Hindi cinema’s veteran actress Tabassum’s sudden departure from this world, now with blockbuster films like ‘Hum Dil De Chuke Sanam’ and ‘Bhool Bhulaiyaa’ He has passed away in Born on October 30, 1947 in Pune, Vikram Gokhale was admitted to the hospital after his health deteriorated. There is an atmosphere of mourning in Hindi cinema due to the death of Vikram Gokhale. Stars are paying tribute to Vikram Gokhale on social media.

Paying tribute to Vikram Gokhale, Bollywood actor Ajay Devgn wrote in a tweet, ‘Vikram Gokhale Sir had a lot of seriousness in his roles. He always stood firm. I had the privilege of sharing screen time with him. His passing is very sad. I pray that his soul rests in eternal peace. Condolences to his family. om Shanti.’

Read also: Veteran actor Vikram Gokhale passed away, was in hospital for 15 daysyou

Actor Nawazuddin Siddiqui wrote in the tweet, ‘A great actor and a wonderful human being. It was always a good experience working with him. May his friends and family get strength…. May Vikram Gokhale’s soul rest in peace.

Paying tribute, Ritesh Deshmukh wrote, ‘Extremely saddened to hear the news of Vikram Gokhale’s demise. A dynamic actor, he was always brilliant in whatever and wherever he played… be it on stage or the big screen. The entertainment world has suffered a great loss. Rest in Glory Sir.

Film director Madhur Bhandarkar tweeted and paid tribute to the late Vikram Gokhale, writing, ‘Sad to hear about the demise of veteran actor Vikram Gokhale ji, one of the finest talented actors, his contribution to Hindi and Marathi cinema will always be remembered for his performances. Will be remembered. om Shanti.’

Vikram Gokhale started his career in the year 1971 with Amitabh Bachchan’s film ‘Parwana’. Vikram Gokhale has worked in dozens of Hindi and Marathi films. Vikram Gokhale had made a special identity in the hearts of the audience with his strong acting in films like ‘Bhool Bhulaiya’, ‘Mission Mangal’, ‘De Dana Dan’, ‘Hichki’, ‘Nikamma’, ‘Agneepath’. Vikram Gokhale played the role of Aishwarya Rai’s father in the film ‘Hum Dil De Chuke Sanam’.

Vivek Ranjan Agnihotri spoke openly on Covid research, said – ‘This victory of ours is defamed..’