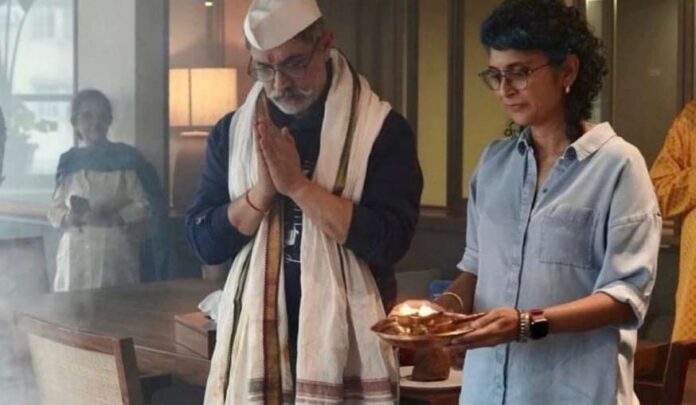 Superstar Aamir Khan was seen in a new look today. Bollywood star Aamir Khan has been in discussion for a few days about his personal life. The actor was seen worshiping his new production house office with his ex-wife Kiran Rao. But this look was not of any of his upcoming films but of the puja performed at the inauguration of the new office of his new production house. Aamir Khan has worshiped his office in complete Marathi tradition and Marathi getup.

Aamir Khan had tied Nehru cap on his head, Tilak on his forehead and Raksha Sutra in his hand. On the other hand, talking about Kiran Rao, she is also seen in a very simple look. He has carried jeans and lawns shirt. She is also seen standing with folded hands with Aamir. At the inauguration of the new office, Aamir installed the urn by breaking a coconut and worshiped it with full rituals. Kiran Rao was also with him on this occasion. Although, Aamir and Kiran have been divorced but both of them are still in coridal term and both of them are still often seen together.

Aamir’s team member has posted some pictures of this Kalash Puja on his Instagram account. In which it can be seen that Aamir is seen worshiping. These pictures of Aamir Khan’s installation of this urn are becoming increasingly viral in the world of internet.