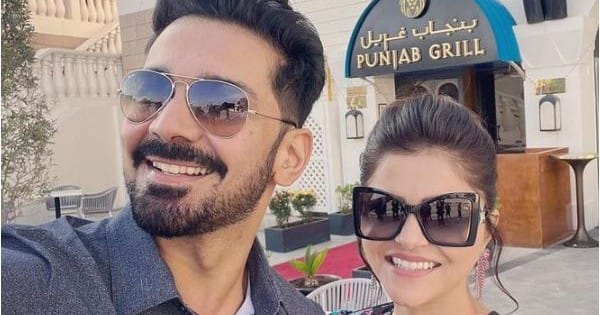 Abhinav Shukla and Rubina Dilaik tied the knot in 2018. The two have been in the television industry for more than a decade and they met on the sets of the show Chotti Bahu. The two actors have also participated together in Bigg Boss 14 in which Rubina won the season. Rubina surely has a huge fan following, and she is the bigger star than Abhinav. Recently, Abhinav opened up about it Rubina being more successful and the actress also spoke about how her husband has always been supportive. Also Read – Trending TV News Today: Shweta Tiwari reacts to Palak being skinny-shamed, Akshay Kumar clears air around tiff with Kapil Sharma and more

During an interview with Pinkvilla, when Abhinav was told that Rubina was a bigger star when they met, the actor said, “She still is.” When the Shakti actress was questioned if she feels she has to overcompensate in their marriage because of her success, Rubina said, “He has made me feel and be so comfortable with the fact that it is absolutely normal for a woman to be more successful than a man. He has vocalised the thought that ‘Rubina, today, tomorrow or any given point of time, if you are at a higher ladder of success, fame-wise, money-wise or anything, I am there for you, for you to understand that it’s normal and we’ve to normalise it.” Also Read – Bigg Boss 14 winner Rubina Dilaik reacts to being called ‘bhains’; says ‘You gain one extra inch and…’

Abhinav added, “We’ve to be practical about it. It is what it is. Somebody would be a fool who doesn’t admit she is more successful. She is doing more work than I am, that’s a fact. So if I try to say, ‘nahi yaar hum dono barabar hain (both of us are equally successful),’ that’s when she needs to compensate. But I know she is more successful than me, but that’s the profession, once she is at home, she is my wife.” Also Read – Shahid Kapoor, Mira Rajput, Rakul Preet Singh and more Top 5 viral pictures of your favourite celebs trending today

During their stint in Bigg Boss 14, Rubina and Abhinav had revealed that one of the reasons to do the reality show was that their marriage was going through a rough patch.