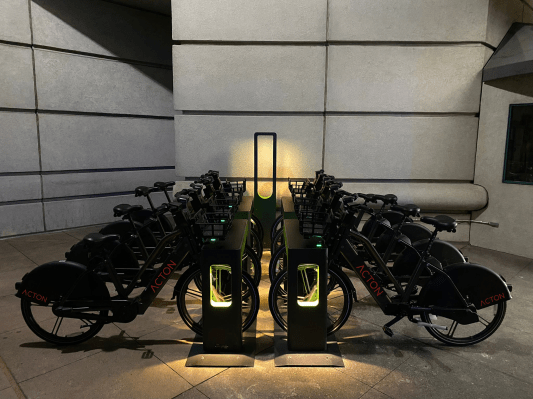 The term “shared micromobility” often calls to mind that Lime e-bike on the nearest street corner or the Voi e-scooter parked next to the bus stop, either of which could on any given day be standing upright or knocked over onto the pavement. In fact, dockless vehicles have  become so normalized that they’re almost synonymous with the idea of scooter and bike shares. That might be changing.

Acton, a U.S. startup that provides electric micromobility vehicles and the cloud-based software infrastructure to run shared fleets for cities and operators, has just acquired Duckt, an Estonian docking and charging infrastructure startup, a move that Acton says will help it to beef up its product offerings, especially for cities.

The company, which has partnered with hundreds of cities and shared operators around the world, wants to offer customers more of an end-to-end product and sees an opportunity to add a bit of order to the chaos of the dockless vehicles today and gain back some operational expenses that are spent finding and charging vehicles in the wild.

“More cities are actually looking to organize things better, so it’s not just about the charging, but also the parking,” Janelle Wang, co-founder and CEO of Acton, told TechCrunch. “The free floating vehicles are wonderful, but at some point, it will need to be organized. You know, if we’re talking about a 15-minute city like Paris or in Berlin where there will be a no-car zone in the city center, micromobility vehicles need to be in a center location, like at a station, but also free-floating.”

While the majority of Acton’s customers are shared operators, with the acquisition of Duckt, the company is also making more of a push for government clients as it positions itself as a company that can offer cities a different way to integrate shared micromobility. The beauty of using Duckt docking stations is that the stations are charge-compatible with almost any scooter or bike, whether a privately owned vehicle or one owned by the bigger operators. The goal is to one day provide enough value that some of the bigger players in the game sign on to use Acton’s docking stations, as well, Wang said.

Providing vehicles or fleets for gig workers or delivery companies is a burgeoning sector and an additional B2B play for Acton, which counts Buyk, a 15-minute grocery delivery startup, as one of its customers.

Until then, the strategy is to provide a solution to the problem of too many scooters and bikes cluttering up the sidewalks, and that requires playing to cities. Duckt, now Acton, has been working with Paris on a pilot to install 150 dock and charge points that can be plugged into bus stations and street lighting for a power source since March last year.

In addition, Acton is working on an upcoming project in New York along the Hudson River, providing the local government with everything from a fleet of vehicles to a software platform to manage the fleet to the charging and docking stations.

Acton has done similar deployments in cities like Ankara and San Francisco, with plans for upcoming projects in Miami, Athens, Cape Town, Mallorca and Barcelona, according to Wang.

Other companies have cropped up over the years with docking and charging stations, like Swiftmile, which has done pilots with Spin, and PBSC Urban Solutions, which has a large docking footprint with notable clients like Citibike.

But generally, there are far fewer players in the docked game, and a lot less VC money going into it, but that doesn’t mean there isn’t a big market opportunity for docking and charging e-bikes and e-scooters. In fact, despite the apparent market dominance of dockless micromobility, of all the bikeshare services in North America in 2020, 56% of them were docked and only 19% were dockless, according to the North American Bikeshare and Scooter Association’s state of the industry report. None of the e-scooter shares were docked, but that says less about potential market share and more about the lack of implementation of e-scooter docking and charging technology.

The bigger geographical market right now is in Europe, where there is more of a conversation going on around making cities walkable and pedestrian-friendly and vastly reducing the reliance on cars, Wang said. Part of that urban planning might very well be where to place docked micromobility stations, and Acton’s investor, EIT InnoEnergy, can help as the company works to make connections and build out its reach in Europe.

Neither Duckt nor Acton would share the terms of the acquisition, but the merger was fueled by an undisclosed investment from the early-stage investor, which specializes in the areas of energy transition and EV and grid technology and is supported by the European Institute of Innovation and Technology, a body of the European Union.

“The Acton and Duckt merger makes for a perfect growth story,” Jennifer Dungs, EIT InnoEnergy’s global head of mobility, said in a statement. “Together, they really have it all – well-designed, high-quality vehicles, the software to manage operations cost-efficiently, broadly compatible charging and docking stations plus the experience and capacity for large scale roll-out. For any given city or corporate looking to plug an off-the-shelf micromobility solution into their transport offering, it does not get much better than this.”