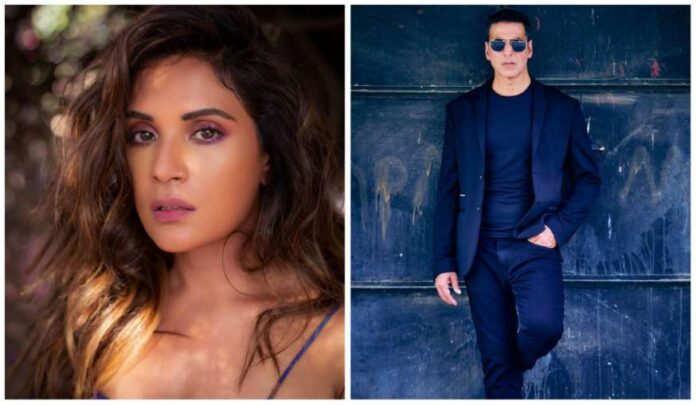 Bollywood actress Richa Chadha has come in limelight many times due to her outspoken statements, but this time tweeting Richa Chadha on social media is becoming very heavy. Recently, Richa Chadha made fun of the Indian Army regarding the Galvan Valley, after which Richa has received displeasure from political parties as well as Bollywood. Recently, Bollywood actor Akshay Kumar expressed his displeasure by sharing a screen shot of Richa’s tweet. This tweet of Akshay Kumar is now making headlines.

Sharing Richa’s tweet, Akshay Kumar wrote, ‘I am saddened to see this. We cannot be ungrateful towards our Indian Army. He is so we are today. Akshay has also shared an emoji of folding hands with this tweet. Reactions of social media users are coming on this tweet of Akshay Kumar.

Let us tell you that Richa Chadha had tweeted reacting to a tweet by Commander Lt Gen Upendra Dwivedi. Upendra Dwivedi wrote in the tweet, ‘If the government orders us, then we are fully ready to take back PoK. We are waiting for the order of the government. Will complete this operation soon. If Pakistan violates the ceasefire, the answer will be different from here, which they cannot even think of. Reacting to this tweet, Richa wrote, ‘Galwan Se High’.

Talking about Richa Chadha’s work front, she is currently busy shooting for her upcoming film ‘Heera Mandi’. Apart from this, Richa will also be seen in the film ‘Girls Will Be Girls’, which is being directed by Shuchi Talati. On the other hand, if we talk about Akshay Kumar, the year 2022 has not proved to be anything special for Akshay. His films released this year have not been able to earn much at the box office.