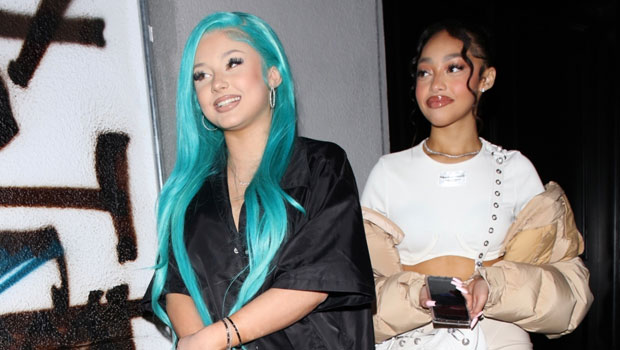 In the new photos, Alabama and Jodie rode in style for a girls’ night out and weren’t afraid to show off their looks as they left their friend date. Alabama chose an all-black ensemble complete with a silky button-down shirt, black skinny jeans, and black platform boots. Keeping it subtle beyond her bright hair, Alabama accessorized with simple gold jewelry and a small monogrammed Louis Vuitton backpack worth nearly $2.5K. For her part, Jodie chose to go for lighter shades, rocking a cropped white t-shirt, a tan puffer jacket, and matching cargo pants. Choosing a matching white mani-pedi and fresh-faced makeup to style the look, Jodie also opted for a studded white leather handbag with plenty of bling.

Though Alabama and Jodie are clearly close as can be, their tight relationship may leave fans with questions as dad Travis’ turns up the romance with Kourtney Kardashian, given Jordyn Woods’ turbulent relationship with the Kardashian Jenner crew. Jordyn was a central member of the Kardashian squad for years, growing especially close with Kylie Jenner. But in 2019, after rumors exploded that Jordyn shared a kiss with Khloe Kardashian‘s ex Tristan Thompson, things were never the same. The palpable drama between the two was captured as cameras rolled on ‘Keeping Up With The Kardashians,’ even leading Khloe to call out Jordyn for her weight at one point. Though Khloe apologized to Jordyn in a lengthy Dec. 2019 post where she wrote “we all make mistakes,” after Tristan Thompson’s latest cheating scandal, many fans called Khloe out for hypocrisy after she made comments stating that women “shouldn’t be blamed” for men’s philandering ways.