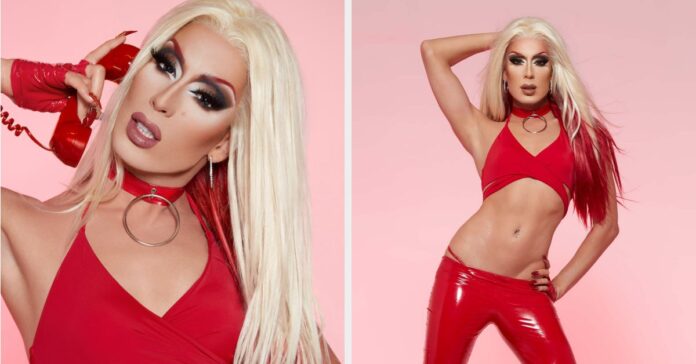 Now, you’re known for having an opinion or two about Drag Race. I wanted to know what you’re overall thoughts were on All-Winners All Stars? Did you like the no critiques/no eliminations format?

AT5000: Oh, so you’ve heard our podcast [laughs]. Actually, I loved it. I mean, it was watching these great artists get to be great artists. And it wasn’t focused on drama, or conflict, or fighting, or cliques, or any of that stuff. That all took a back seat to just fucking good drag queens doing good drag. So I hope that they saw what a success this season was. And I hope that they kind of keep it going that way, because I was really, really impressed by it. I was really fucking glad I wasn’t there. Because they’re too good at drag — everyone’s too good at drag now. Oh, my god.

That was actually my next question. You were very open about not getting the call to be on this season. So would you be open to doing a future season? And who would you be most excited and or terrified to compete with?

AT5000: Well, I’d be most excited and most terrified to compete with Bob the Drag Queen. Because I really love working with Bob; like, we’ve done a few things together, and we just have a great chemistry and a great rapport. So instantly, we would be in an alliance. Bob, I’m already calling on you for an alliance if you’re reading this. But also I would be going into it with no intention of winning. I just want Bob to win. So I will help Bob any way I can.

Is there any part of you that’s scared to go back? Because you’ve been away from the franchise at this point for some time, and also, you know, that sometimes some of the people in the fandom can be very harsh on the queens. Is that something that would hold you back from returning to the show?

AT5000: No, I mean, all that is really just, like, noise. The talking shit about the queens on this show has gone into such overdrive. That is really shocking and mortifying. But it’s also at the end of the day just noise. RuPaul’s Drag Race started the literal year I started doing drag; like, my path on that show has been its own destiny, and it’s been meant to be whenever it’s happened. So if it ever happened again — which I don’t even think it ever will — but, if I got called to go do RuPaul’s Drag Race again, of course, I will take the opportunity, and I’ll make the most of it because it’s my fucking calling and my destiny on this planet. And I don’t care what anyone has to say about it. I don’t!