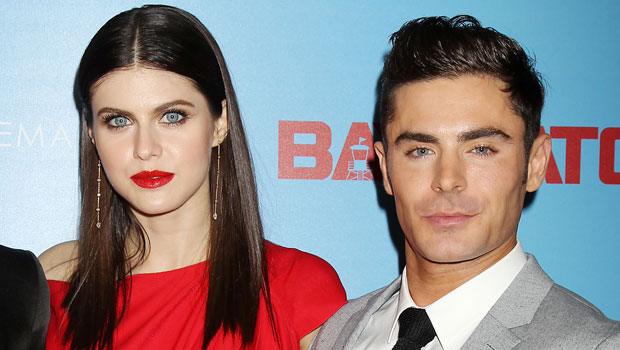 Here is every A-lister that Alexandra has dated including Zac Efron, Trey Songz and more before she met her current fiancé Andrew Form.

Alexandra Daddario is happily engaged but she has dated some of Hollywood’s hottest celebrities before that. The 36-year-old actress is best known for her starring roles in The White Lotus, Baywatch and Texas Chainsaw. When she was still on the market, Alexandra opened up about how she struggled with dating.”I date, but I’m really nervous around boys. I get very tentative,” Alexandra told Women’s Health Magazine back in 2017, adding, “I’ve gone on yoga dates with guys, which I love. They might get grossed out by me because I sweat so much, but that’s how you know if they’re a keeper.” Fortunately, it’s not something she needs to worry about anymore. Here’s a list of all the A-listers Alexandra has dated.

Andrew Form is Alexandra’s current fiancé! News broke that the 52-year-old film producer popped the question to the actress in December 2021 when she was spotted with a massive diamond engagement ring. The two have had an extremely fast-paced relationship as they only confirmed it earlier that year in May 2021. While Alexandra has never been married before, Andrew had previously wed Jordana Brewster, so maybe he’ll be able to show her the ropes.

Brendan Wallace may have first made his way into the spotlight when he dated Emma Watson but he also was in a relationship with Alexandra. Their romance kicked in 2019 when they took a romantic trip to Italy together. Their passion-filled vacation was enough to fuel their relationship for two years and the two even got engaged. Unfortunately, it wasn’t enough for it to last and they split in April 2021.

Alexandra had a brief fling with journalist and attorney Ari Melber. The two sparked dating rumors when they were spotted kissing in a car. Even though they reportedly matched together by mutual friends, their situationship didn’t grow into anything more than that.

Zac Efron and Alexandra swirled up dating rumors when they starred together in the 2017 remake of Baywatch. Their chemistry both on and off of set had fans wondering if they were an item in real life. The actress had been very adamant that the two were just friends but that apparently wasn’t what was going down behind the scenes. “Alexandra is all in with Zac but not all in about telling anyone about it,” a source told HollywoodLife EXCLUSIVELY at the time. “She was very coy about it at the Rampage premiere to friends and her fellow Baywatch co-star The Rock has even been kept in the dark about it.”

“People that are close to her know that this a defense mechanism because she really wants it to work and doesn’t want anything to get in the way of a great love match,” the source continued. “She wants to make it look like she is single in public but is 100% all about Zac and the relationship they are brewing.”

Logan Lerman was Alexandra’s first fiancé! The two met while filming the Percy Jackson franchise together. The actor popped to the question to Alexandra in December 2014. Unfortunately, their engagement didn’t last for long and they ended up splitting less than a year later in August 2015. While reports said their split was due to different schedules, Alexandra wrote a cryptic tweet at the time that said “love is a lie,” according to Distractify, so there may have been more to the story.

Alexandra also had a brief fling with hit music artist Trey Songz. The two were romantically linked back in 2011 and not much is known about their relationship. However, whatever their situationship may have been, it must have been pretty brief since she moved on to Logan not too long after.

Jason Fuchs was reportedly Alexandra’s first love, according to The Inquisitr. The pair started dating back in 2006 and stayed together for three years up until 2009. While they may not have lasted, it’s likely Jason will always have a place in her heart as her first love.