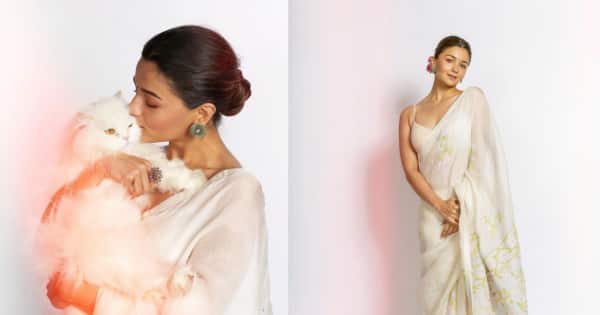 Alia Bhatt is on her toes promoting her upcoming film Gangubai Kathiawadi. It is helmed by Sanjay Leela Bhansali and also stars Ajay Devgn in pivotal role. The trailer of the film was recently unvieled by the makers and it received a thunderous applause from all. Now the actress is doing her best to create maximum buzz around the film. More than the film though, we are absolutely in love with her sartorial choices of sarees. She recently doned a white saree with a thin strap blouse and looked absolutely gorgeous. But there is someone else who stole our hearts in latest pics. Scroll on to know who! Also Read – Trending Entertainment News Today: Sanjay Raut defends Shah Rukh Khan; Alia Bhatt wants to work with Allu Arjun and more

Alia Bhatt shared some stunning pictures on Instagram as she posed in white saree with floral designs on it. She chose to nice pink roses to attach to her hair bun. She accentuated her look with floral handcrafted earrings and ring. While she flaunted her style, the first picture that she shared is with her pet Edward and it indeed made our day. She shared the picture with the caption, “Edward Bhai Aur Gangubai.” So cute! Also Read – Alia Bhatt reveals her family has become Allu Arjun fan after watching Pushpa; they are asking, ‘Aalu when will you work with Allu’

Gangubai Kathiwadi is going make it to the theatres on February 25, 2022. The film was initially slated to release in the month of January, however, the makers pushed its release to make space for Alia Bhatt, Jr NTR, Ram Charan and Ajay Devgn’s film RRR. But due to Coronavirus, RRR got postponed and now it will release in the month of March. Alia has two back-to-back major, big-budget films releasing in the theatres and well, if all goes well, we may also see Brahmastra with Ranbir Kapoor in the theatres this year. Fingers crossed! Also Read – Alia Bhatt, Shivangi Joshi and more Top 5 viral pictures of your favourite celebs trending today