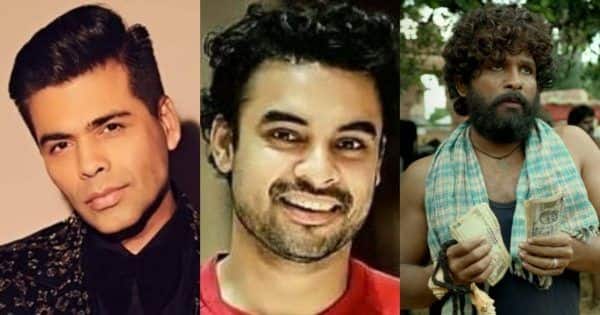 Among the top newsmakers of today from OTT, we have Allu Arjun, Karan Johar, Tovino Thomas and many more. Allu Arjun’s Hindi version of Pushpa has got a release date, Karan Johar is mighty impresses with Minnal Murali actor Tovino Thomas, Squid Game actor creates history, Chiyaan Vikram’s Mahaan and Cobra to release directly on OTT and other such stories are a part of our trending OTT news. So read on to know more about our OTT newsmakers of the day. Also Read – Allu Arjun’s Pushpa in Hindi, Shefali Shah’s Human, and more; movies and web series to look forward to this week

Allu Arjun’s Hindi version of Pushpa gets an OTT release date
This is great news for all those who have been waiting for the Hindi version of Allu Arjun and Rashmika Mandanna starrer Pushpa: The Rise – Part 1. Amazon Prime Video took to Instagram to make an announcement about it. The post read, “The fire is going to burn brighter! Watch #PushpaOnPrime in Hindi, Jan 14 @alluarjunonline #FahadhFaasil @rashmika_mandanna @dhananjaya_ka @suniltollywood #AjayGhosh #RaoRamesh @og_jagadeesh_prathap @iam_shatru @itsme_anasuya @actorshritej @mimegopi_off @brahms25 @aryasukku @mythriofficial #MuttamsettyMedia.” Also Read – Pushpa: Hindi version of Allu Arjun, Rashmika Mandanna starrer to stream on Amazon Prime Video from THIS date

Tovino Thomas, who has been basking in the success of his recent Malayalam superhero film ‘Minnal Murali’, recently received praise from Dharma Productions head honcho Karan Johar, who sent a personalised text on the actor’s WhatsApp. To express gratitude for the same, Tovino took to his Instagram and shared a screengrab of the message. The message shared by Karan reads, “Hey Tovino! I finally got the opportunity to watch Minnal Murali last night and has so much fun! So smartly made and keeping the entertainment quotient right through! Was a clutter breaker superhero film! And of course you were and are incredible! Congratulations! Such a joy! (sic)”. To which Tovino replied with a humble, “Thank you so much sir! It means a lot to us.”

Squid Game actor O Yeong-su creates history
Squid Game is one of the most popular things on OTT. Now, one of the actors from the web-series, O Yeong-su, has created history by winning a Golden Globe award for Best Supporting Actor in Television. He has become the the first Korean to win the Golden Globe.

Filmmaker Vinil Mathew, known for films like Hasee Toh Phasee and Haseen Dillruba, likes to explore the vulnerable side of people through his stories as he delves into the psyche of his characters to craft compelling stories. Commenting on the same, the filmmaker, “I enjoy dealing with human relationships and their minute shades. As a filmmaker, it challenges and excites me to explore quirks and vulnerabilities of human behaviour in everyday life.” He added, “Both Hasee Toh Phasee and Haseen Dillruba were quirky and genre-bending stories yet relatable. I hope to continue the same ahead with all my projects.” Haseen Dillruba, which was released in July last year, featured Taapsee Pannu, Vikrant Massey and Harshvardhan Rane and received a positive response from the audience.