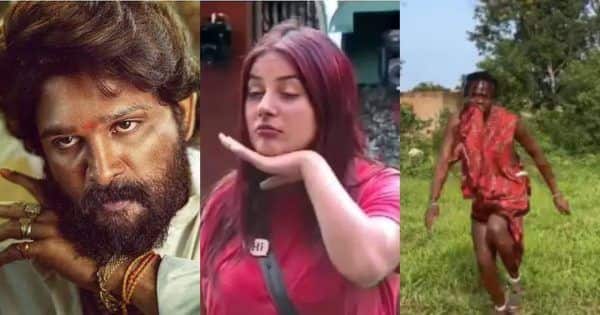 Allu Arjun, Shehnaaz Gill, Kili Paul, Vishnu Visha, Vikram, Naga Chaitanya and others are among the top newsmakers of today from South. If you have had a busy day and want to know what happened in the world of entertainment, you are at the right place. Allu Arjun’s Pushpa hand gesture inspired by Shehnaaz Gill, Kili Paul’s new reel on Saami Saami, Mahaan makers release new song Rich Rich, Naga Chaitanya’s web series debut to be a horror thriller and other such stories are a part of our trending South news. So read on to know more about our South newsmakers of the day. Also Read – Did Allu Arjun copy Shehnaaz Gill’s hand gesture as his signature move in Pushpa? This video from Bigg Boss 13 raises doubts

Allu Arjun’s Pushpa hand gesture inspired by Shehnaaz Gill
Social media users can ne pretty smart. Nothing can be hidden from them. They have now re-discovered a video of Shehnaaz Gill from Bigg Boss 13 in which she is seen pulling off exactly the same signature move that Allu Arjun performed in Pushpa. Also Read – Allu Arjun’s Pushpa to Ranveer Singh’s Gully Boy: 7 hilarious memes where films meet food will make you go ROFL

Mahaan makers release new song Rich Rich
The makers of Mahaan released a new lyric video of Rich Rich the fourth single from the film. The film is Vikram’s 60th film and the first in which he will be seen acting alongside his son Dhruv.