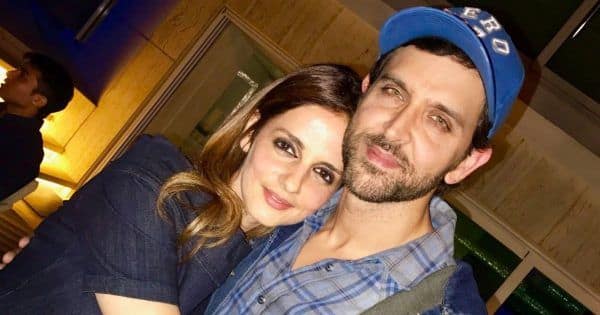 Hrithik Roshan has been hitting headlines for his recent outings with Saba Azad. He was seen going hand-in-hand with Mujhse Fraaandship Karoge actress, which has made fans wonder if the War actor is moving on in life after his divorce. Amid the dating rumours, Hrithik got drawn to his ex-wife Sussanne Khan after she posted a workout video on Instagram. More than her intense workout, Hrithik fell in love with Sussanne’s gym shorts. Also Read – Tejasswi Prakash-Karan Kundrra, Katrina Kaif-Vicky Kaushal and more: Here’s how these 6 latest celeb jodis will celebrate Valentine’s Day 2022

In the video, Sussanne was seen performing different types of workouts targetting her specific muscle groups. She was wearing a black tank top and printed shorts which pulled Hrithik’s attention. “Haha I like the shorts,” he dropped a comment on her post. Hrithik and Sussanne are cordial with each other and they are co-parenting their two sons Hrehaan and Hridhaan. They got married in 2004. Ten years later, in 2014 the couple separated. Sussanne has been in the news for her rumoured relationship with Arslan Goni. Also Read – Hrithik Roshan-Saba Azad, Malaika Arora-Arjun Kapoor and more: Divorced stars who found love again and did not hide it [VIEW PICS]

On the work front, Hrithik will next be seen in Vikram Vedha. The film stars Hrithik and Saif Ali Khan in lead roles, with Radhika Apte in a crucial role. Pushkar and Gayatri, the original writers and directors, are donning the director’s hats for the Hindi remake as well.

A cult film in its own right Vikram Vedha is a neo-noir action crime thriller film. Based on the Indian meta-folktale Vikram aur Betaal, the film tells the story of a tough police officer who sets out to track down and kill an equally tough gangster. This original Tamil blockbuster starred R. Madhavan and Vijay Sethupathi. Hrithik also has Fighter with Deepika Padukone.