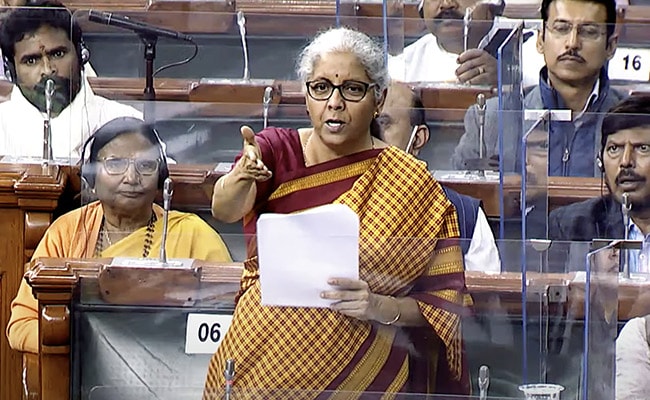 Nirmala Sitharaman was speaking in the Lok Sabha on the budget.

There was indeed “Andha Kaal” or dark age in the country, but it was during Congress rule, Finance Minister Nirmala Sitharaman said on Thursday, rebutting opposition criticism of her latest union budget and Congress MP Shashi Tharoor’s wordplay on the government’s “Amrit Kaal” plan.

“A senior member of the house said ‘This is not Amrit Kaal, this is ‘Andha Kaal’,” Ms Sitharaman said in parliament, defending the government’s label for the next 25 years leading up to 100 years of Independence.

“He (Shashi Tharoor) said India is facing ‘andha kaal’. Sir, there was an andh kaal, but it was by the Congress,” the Finance Minister said.

“In 1991, we had foreign exchange reserve for two weeks and we also know about the Emergency, that was andha kaal,” she said.

Opposition parties had earlier said that this year’s union budget had neglected the poor and farmers and provided no relief to the middle class hurting from the pandemic.

Trinamool Congress MP Saugata Roy had described the budget as “cruel” to country’s poor and said it does not offer to provide any relief to common man from inflation.

Rajya Sabha member Akhilesh Prasad Singh of he Congress said the budget did not mention the 27 crore people who have slipped below the poverty line and offered no plans to uplift them and increase their income.