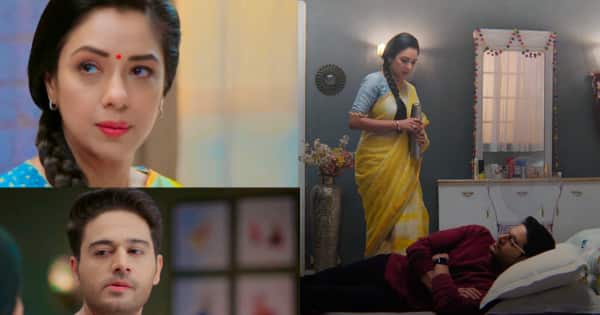 Anupamaa headlined by Rupali Ganguly is one of the most popular TV shows in recent times. Fans are totally in love with Rupali Ganguly and Gaurav Khanna‘s chemistry in the show. He plays the role of Gaurav Khanna who has been in love with Anu since his college days. Now, Anu and Anuj are staying under one roof as he has handed over his business to sister Malvika and has gone bankrupt. In the latest episode, we saw a sweet nok-jhok between Anu and Anuj. While Anu insisted that she will sleep on the floor and he should take the bed, Anuj was in no mood to listen to her. MaAn fans are unable to get over the sweet chemistry they share. Also Read – Not Anupamaa’s Rupali Ganguly-Gaurav Khanna, but this onscreen jodi tops the list of most romantic jodi on TV – view pics

#MaAn babies fighting over their sleeping arrangements
How cute is this❤️❤️??#Anupamaa#AnujKapadia pic.twitter.com/XQo2LQ0Oyb

she deserved someone like him, since always and for a forever #Anupamaa | #MaAn pic.twitter.com/2cEyZVTYNw

just Anupama falling in love with Anuj all over again ?#anupamaa • #MaAn pic.twitter.com/AtaDOPTzhb

Their bickering selves are the cutest ones ??
“Manne remember chhe!” He is that spontaneous when it comes to comedy matlab level hi alag hai inka!
Give me a spinoff in rom com starring these two right away, take all my marbles I won’t ask twice ?#Anupamaa #AnujKapadia #MaAn pic.twitter.com/2YL1L4qnGQ

Now, MaAn fans are super excited to see the Valentine’s Day special episode of Anupamaa. Both the characters love each other immensely but will they finally confess their feelings? Let’s wait and watch. Also Read – Anupamaa: A Rupali Ganguly-Gaurav Khanna fan makes a HOT edit on Zara Zara Touch Me as Valentine’s Day promo excites fans – watch video