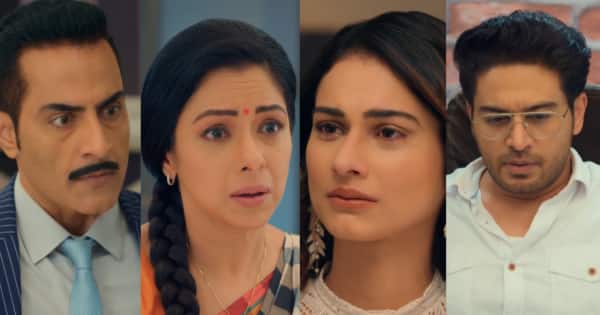 Anupamaa 7 February 2022 latest twist: Rupali Ganguly, Gaurav Khanna, Sudhanshu Pandey, Madalsa Sharma and Aneri Vajani starrer Anupamaa has taken a new twist that has left fans excited and worried. Just the other day, we saw Anuj (Gaurav Khanna) making a decision when Malvika asks him to give up on Anupamaa. He instead decides to give up his business. Anupamaa had transferred her share to Anuj. And the latter, in turn, gave everything to Malvika. Now in the upcoming episode of Anupamaa, we will see some interesting twists. Also Read – Trending TV News Today: Naagin 6 star Tejasswi Prakash names favourite serpent from past, Rupali Ganguly mourns Lata Mangeshkar’s demise and more

Anu (Rupali Ganguly) will be left in a huge shock when she learns about Anuj’s decision to hand over the business to Malvika. She will reprimand him for making such an unwise decision. Anupamaa is in disbelief that Anuj has given away his entire business without giving it a thought. Anuj is one of the most successful businessmen and Anu knows that he has worked very hard to be where he is. But giving away his entire business is not very wise. Anupamaa will try to make Anuj understand the magnitude of his decision. However, Anuj (Gaurav Khanna) is not ready to lose either Malvika or Anupamaa this time. And hence, he flatly refuses to change his decision, even when Anupamaa insists to rethink. Also Read – Anupamaa: Rupali Ganguly performs on viral Kacha Badam trend; MaAn fans say ‘ek Gaurav sir ke saath bhi chahiye’ – watch

Anupamaa will be in disbelief and says that she won’t support his decision. However, Anu has decided to stand with Anuj against Vanraj (Sudhanshu Pandey). She will meet with Mukku. Vanraj will be there too. However, she will tell Malvika that she wants to talk to her alone. Malvika will ask Vanraj to leave them alone. Vanraj is worried that Anupamaa might get spoil his plans. Anupamaa will take a firm stand this time. She will warn Mukku against Vanraj saying that the one she wants to work with right now may throw her out one day. Elsewhere, Vanraj will taunt Anuj for giving away his business so easily. Also Read – Anupamaa: Valentine’s Day comes early for Anuj aka Gaurav Khanna and wife Akanksha as they get romantic in a bathtub – Watch Video