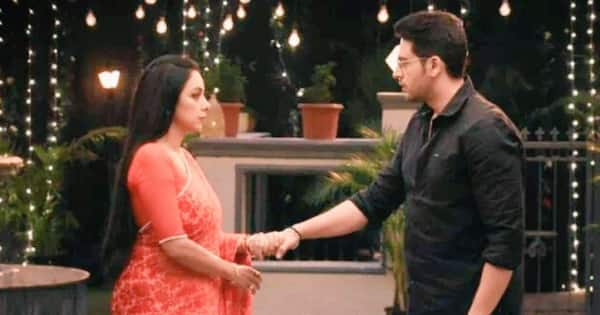 Fans of Anupamaa are a bit worried. The show has seen a small dip in ratings. Now, the channel has unveiled the love confession promo of Anupamaa (Rupali Ganguly) and Anuj Kapadia (Gaurav Khanna). We can see her in a red saree with her hair left open. Gaurav Khanna is looking handsome in a tee and denims. Fans are excited to see if Anupamaa and Anuj will reunite after 26 years. After all, he has been in love with her for more two decades. The last scene with the rose and the book was only for two to three minutes. Fans have warned the makers that they want a proper love confession for #MaAn. They do not want any extra content involving other members of the Shah or Kapadia families. Also Read – Anupamaa: Anuj aka Gaurav Khanna shares a passionate underwater KISS with wife Akansha Khanna ahead of Valentine’s Day

In the middle of all this, a fan of Anupamaa has made an edit of the two on the song Zara Zara Touch Me from Race. The original song is filmed on Katrina Kaif and Saif Ali Khan and is hailed as a sexy number. The video made by the fan is quite lit. Just take a look… Also Read – Mouni Roy, Shivangi Joshi, Harshad Chopda and more: 11 TV celebs who ruled Instagram this week with viral posts

Disclaimer: this is not meant to disrespect either of the actors or offend anyone. I ❤️ & respect them immensely. I’m just showing my ❤️ for the chemistry #AnujKapadia & #Anupamaa have onscreen?? pic.twitter.com/26PDYcd8Cb

Fans are surprised that someone could imagine #MaAn on such a sensuous song. Take a look at the reactions… Also Read – Rupali Ganguly-Gaurav Khanna, Nakuul Mehta-Disha Parmar and more – vote for TV’s most romantic onscreen jodi

Anupamaa fans are having too much fun seeing this version of their sanskari couple. The chemistry between Rupali Ganguly and Gaurav Khanna is tremendous on the show. They are great friends. Today, Gaurav Khanna posted an underwater kiss video with his real life sweetheart wife Akanksha Chamola. It was lit!