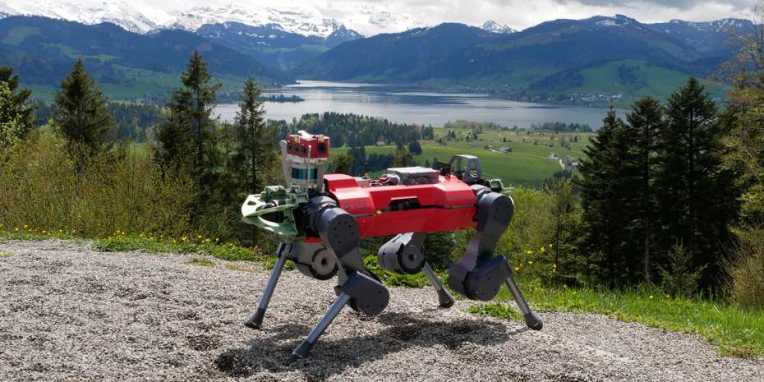 It’s been pretty astonishing to see what robotics researchers have been able to accomplish with legged robots over the past few years. Oregon State University taking Cassie for a 5K back in July springs to mind. This week researchers at ETH Zurich announced that they were stretching their own ANYmal robot’s physical capabilities in similar fashion by training it climb a nearby mountain.

The team trained the quadruped (which bears more than a passing resemblance to Boston Dynamics’ work) to walk up nearby Mount Etzel, a modest summit that stands some 1,098 meters (3,600 feet) above sea level. The team says the robot was able to make the 120 vertical meter hike in 31 minutes — a full four minutes faster than is standard for human hikers. Doubly impressive is that the robot apparently accomplished the task without stumbling or mis-stepping — more than a lot of humans can probably say.

Researchers say the feat was accomplished by way of a control scheme recently highlighted in a scientific journal that combines imaging with tactile feedback. The pairing makes it easier for the robot to operate on uneven terrain and in low visbility — both frequent issues while hiking. Based on the feedback, the robot determines, among other things, how cautiously it needs to make its steps. The tech was initially tried in a virtual environment before the quadruped went up the mountain.

“The robot has learned to combine visual perception of its environment with proprioception – its sense of touch – based on direct leg contact,” lead researcher Marco Hutter says in a release. “This allows it to tackle rough terrain faster, more efficiently and, above all, more robustly,” Hutter says. In the future, ANYmal can be used anywhere that is too dangerous for humans or too impassable for other robots.

The ability to maintain steady footing on uneven terrain is a key feature roboticists have been working to develop in quadrupeds. Utilizing such real-time processing could ultimately prove useful for robots sent into dangerous situations to keep humans out of harm’s way.