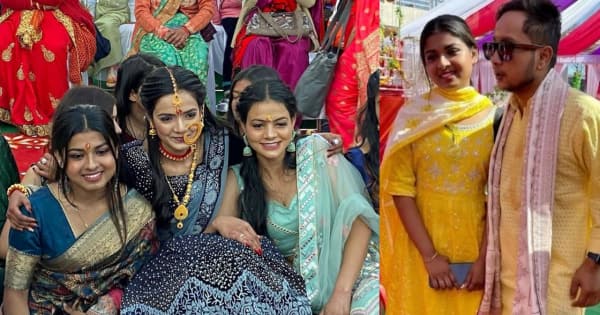 Arunita Kanjilal had joined Pawandeep Rajan and his whole family in Champawat, the Indian Idol 12 winner’s home town for his sister’s wedding. Arunita had been there for a couple of days it seems. One of the most loved singers of Indian Idol 12, Arunita Kanjilal participated in every function, right from Haldi, Sangeet to the wedding. Pawandeep had been a gracious host to Arunita, making sure she was doing fine. The fans of Arunita and Pawandeep, who call themselves AruDeep, have been sharing pictures and videos from Pawandeep’s sister Chandni Rajan’s wedding. They are loving the fact that Arunita was treated like family throughout. Also Read – Are Pawandeep Rajan-Arunita Kanjilal really a couple? Here’s what Indian Idol 12’s Mohd Danish has to say

In one of the videos, we see, during haldi, Pawandeep helping Arunita out in applying haldi and also making her laugh. Twinning in Yellow, they pose for pictures with the bride-to-be, Chandni. The latter also applies haldi to Arunita. There’s another video from the Bridal entry sequence and Arunita is right beside Pawandeep. Infact, Pawan’s sister pushed Arunita ahead so, she could be in the video that was being shot as the rest of the family. Also Read – Trending TV News Today: Avinash Sachdeva REACTS on split with Palak Purswani, Gauahar Khan SLAMS Karan Kundrra’s ‘stupid’ remark for Pratik Sehajpal’s mom and more

Another video that is going viral on social media is from Sangeet night, it seems. Pawandeep is all alone on stage, crooning a song. He invites Arunita on stage and the two sing a duet to the loudest cheers of friends and families. It’s a treat for all AruDeep shippers. A couple more videos from Sangeet and Wedding are also going viral. Check them out here: Also Read – Birthday girl Arunita Kanjilal and Pawandeep Rajan’s romantic jugalbandi is a treat for all Arudeep shippers – watch video

Pawandeep Rajan and Arunita Kanjilal have been shipped together by a lot of people. Fans love the chemistry between them. It all began on the sets of Indian Idol 12. However, the two have maintained that they are best of friends and there’s no romance brewing between them. And these videos look like Arunita has already become a part of Pawandeep’s family.