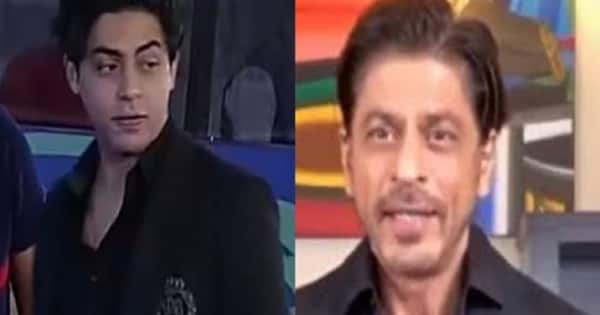 Aryan Khan has been grabbing headlines ever since he stepped out to attend IPL auction 2022 to represent his father Shah Rukh Khan along with sister Suhana Khan. The superstar’s 24-year-old son is winning hearts and how. And now fans have been claiming Aryan Khan wore father SRK’s clothes to attend the auction. Shah Rukh’s diehard fans shared an image of Aryan Khan’s picture from IPL auction 2022 and SRK’s old picture where he is seen wearing the same blazer that Aryan Khan wore for the event. Aryan is indeed a replica of his father. Fans cannot stop comparing their looks, mannerism, and calling that Aryan is just like his father Shah Rukh Khan. Take a look at how fans are going gaga over Aryan Khan raiding daddy Shah Rukh Khan’s wardrobe and admiring him. Also Read – IPL Auction 2022: Shah Rukh Khan’s KKR and Preity Zinta’s Punjab Kings team have roped in these stellar players [VIEW PICS]

Opps I am even in love with @iamsrk’s kids. pic.twitter.com/1i5n8JdrXo

precious son of his father… He looks like a king, that is, like his father.. we love you very much.. stay happy and healthy ❤ @iamsrk #ShahRukhKhan #AryanKhan pic.twitter.com/swu3KPuA06

Suhana Khan who attended the auction for the first time was welcomed by Kolkata Knight Riders co owner and Bollywood actress Juhi Chawla. She took to her Instagram and welcomed all the three kids along with her daughter Jahnavi who attended the auction last year with Aryan Khan. Juhi wrote, ” Welcome to our KKR players, Shreyas Iyer, Pat Cummins, Nitish Rana…and our bunch of young owners Aryan, Suhana and Jahnavi ..!!! Thank you Venky and allllll our KKR staff. Super grateful and Super happy…!! @shreyas41 @patcummins30 @nitishrana_official @___aryan___ @suhanakhan2 @jahnavi_mehta @kkriders @mysore.v @iamjaymmehta @iamsrk #kkr #ipl2022.” Also Read – As Aryan Khan-Suhana Khan steal the show at the IPL Auction 2022 — Here’s a look at 5 instances when Shah Rukh Khan’s children made news in their own right