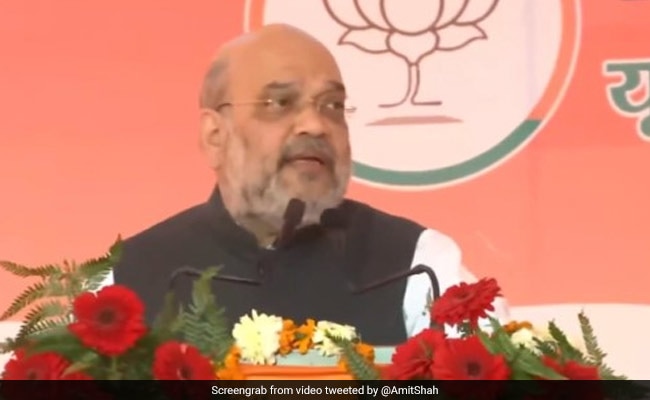 UP Polls: BJP’s agenda is to make UP a “proud state once again”, said Amit Shah. (File)

Union Home Minister Amit Shah on Saturday said the agenda of the BJP is to make Uttar Pradesh a “proud state once again”.

Taking a dig at Jawaharlal Nehru, Mr Shah said it took a Modi government to complete an irrigation project whose foundation stone was laid by the country’s first prime minister.

The agenda of the BJP is to once again take Uttar Pradesh to the top of the list of most prosperous, most literate states, Mr Shah said during the ‘enlightened class conference’ organised by BJP Rajya Sabha member Sanjay Seth in Lucknow.

“It took 59 years to complete the projects, which is more than my age (57 years). Even the foundation stone of the project, which was laid back then, was lost. We have worked to get a stone named after Jawaharlal Nehru installed,” Mr Shah said.

The home minister cautioned that the governments running on the basis of casteism, dynasty and appeasement can never do good to Uttar Pradesh.

Appreciating the works of PM Modi and Uttar Pradesh Chief Minister Yogi Adityanath, Mr Shah said the BJP government improved law and order in the state and as a result, Azam Khan, Ateeq Ahmed and Mukhtar Ansari were all in jail at the same time after 15 years.

Stressing that the BJP ended “criminalisation of politics” and “politicisation of administration”, Mr Shah said, “Today, officers take decisions according to the Constitution, laws and rules, due to which many things have been set right.”

He said in the last five years, development in Uttar Pradesh was evident in health, education and infrastructure sectors with financial support from the central government.

“Akhilesh Yadav used to provide 24 hours electricity to Saifai and Lucknow, but the Yogi government has given enough electricity to every village and city,” he said.