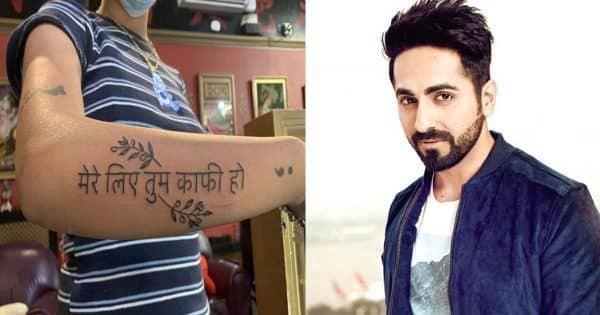 Ayushmann Khurrana is one of the most popular actors we have. He has been phenomenal in choosing the right films and has been great in them. Now, a fan took to Twitter to share a tattoo on her arm with the lyrics of his song ‘Mere Liye Tum Kaafi Ho’. The song is from Shubh Mangal Zyada Saavdhan. Her caption read, “Mere liye tum kaafi ho @ayushmannk Tat #11 means a lot to me.” The actor reacted with a heart emoji. Have a look at their interaction below: Also Read – Anek vs Mission Majnu: Ayushmann Khurrana starrer to clash with Sidharth Malhotra’s film at the box office

Meanwhile, the actor says he feels humbled if he has set an agenda for content in the country. He has played gay man on screen (Shubh Mangal Zyada Saavdhan), played a bald hero (Bala), played a hero with erectile dysfunction (Shubh Mangal Saavdhan), a sperm donor (Vicky Donor), tackled how every body type should be celebrated (Dum Laga Ke Haisha), backed a film about the inclusivity of the transgender community in India through Chandigarh Kare Aashiqui. Also Read – Ayushmann Khurrana’s next after Chandigarh Kare Aashiqui headed straight to OTT? Here’s what we know [EXCUSIVE]

When asked to comment on how he has been the only star driving important social conversations in the country for the last five years through his content-pole cinema, Ayushmann says, “Have always felt that films that not only entertain people to their fullest but also leave a message for everyone to ponder over in the most unique and fun way, are movies that are the most engaged with and discussed heavily.” Also Read – Vaani Kapoor hopes filmmakers feel confident to approach her for any role after watching her in Chandigarh Kare Aashiqui

He adds, “So, maybe, subconsciously I have found myself pulled towards scripts that have radiated this novelty.”

He also says, “In my pursuit to find the best scripts that the Hindi film industry can make, if I have found myself projects, directors and film-makers to set an agenda for content in my country, then I’m deeply humbled. I have been a fortunate actor who has been trusted by outstanding film-makers with their visionary scripts. So, if I have set agenda for content over the years, I share that honour with my creative collaborators who have punted on me and also approached me with such disruptive content that hasn’t been made by Hindi cinema before.”

Ayushmann has a couple of films lined up for release. He will be next seen in Anubhav Sinha‘s Anek, Anubhuti Kashyap’s Doctor G and film-maker Aanand L. Rai’s Action Hero being directed by debutant Anirudh Iyer.

He says, “I’m proud of my body of work and it will be my personal ambition to keep finding more such projects that hopefully contribute towards giving people fresh and remarkably new films that don’t have a reference point in Indian cinema.”