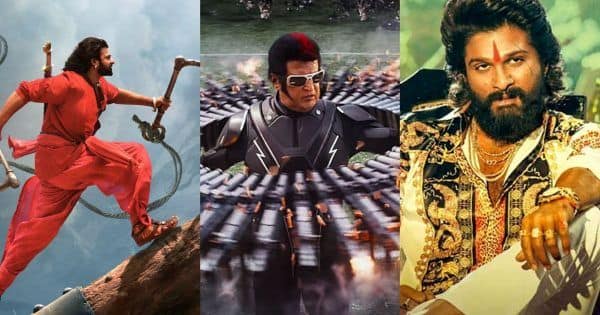 Names like Prabhas, Rajinikanth, Allu Arjun and Yash are synonymous with massive blockbusters in Tamil, Telugu and Kannada cinema, but did you know that their star power and box office pull aren’t restricted to local territories alone? And no, we aren’t merely referring to how much their movies collect in overseas markets where South movies generally do quite well. With boundaries being erased rapidly and Indian cinema becoming more nationalised rather than the demarcations that existed previously between Bollywood and regional cinema, these South superstars have conquered the Hindi belt in the recent past like few have before them, including they, themselves, with their erstwhile releases. Also Read – Pushpa: Allu Arjun REACTS to Anupam Kher’s ‘rockstar’ comment and desire to work with him; Icon Star wins hearts again

We’ve all seen what Allu Arjun starrer Pushpa has just managed at the box office in Hindi markets, and we’re well aware of the storm Baahubali: The Beginning and Baahubali: The Conclusion achieved before it, but what are the other South movies that raked in huge moolah in their Hindi dubbed versions. Without further ado, here are the highest grossing South movies in Hindi… Also Read – Pushpa: Sam Bahadur actress Sanya Malhotra gives her own twist to Samantha Ruth Prabhu’s ‘Oo Antava’ song from Allu Arjun starrer – watch video

As can be evidenced above, only four South heroes have hitherto managed to score in the Hindi belt, including Rajinikanth, Prabhas, Allu Arjun and Yash, which is why we had mentioned their names in the beginning itself. In fact, Prabhas features thrice on the list of highest grossing South movies in Hindi dubbed versions while Rajini appears twice, demonstrating how dominant these two are even outside of their home base.