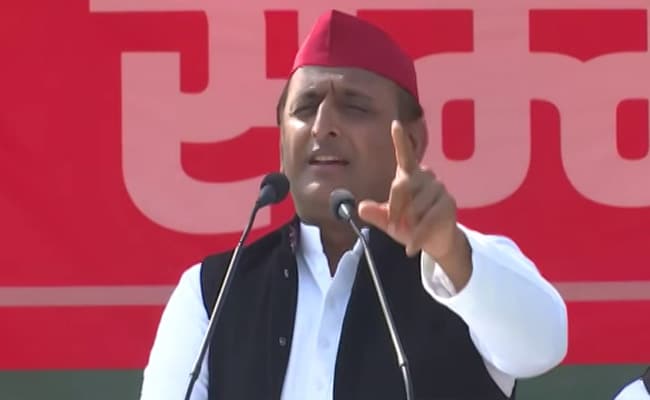 “Ashish Mishra will not get bail from people’s courts,” Akhilesh Yadav said today.

Samajwadi Party president Akhilesh Yadav on Saturday hit back at Yogi Adityanath’s allegations that the relatives of Ahmedabad blast convict had links with the SP stating that “baba”, the Uttar Pradesh Chief Minister, did not know anything.

Speaking to ANI, Mr Yadav said, “Our baba CM is wonderful (Kamaal ke hai). Neither he knew anything before, nor does he know anything right now. The UP election is for rights of farmers, employment of youth, and development of the state.”

Addressing a public rally in Pilibhit, Chief Minister Adityanath had earlier today said an Ahmedabad court had pronounced the quantum of sentence for 38 terrorists in the 2008 serial blasts case. “Capital punishment and life imprisonment were awarded. They included some terrorists from UP too. And, the family of one of them was seen with the SP chief asking for votes for the party,” the CM said.

“You can imagine… Nayi hawa hai, wahi SP hai, SP ka haath, aatankwadiyon ke saath (there’s a new wave, but the SP is the same; hands of the SP are with terrorists). This has been proven once again,” he said.

Also, Union Minister and BJP leader Anurag Thakur, in a press conference today claimed that the SP has links with the 2008 Ahmedabad serial blast case and also gives protection to terrorists.

Meanwhile, when asked to comment on Ashish Mishra who was recently granted bail in the Lakhimpur Kheri violence case, Mr Yadav said, “Ashish Mishra will not get bail from people’s courts.”

Taking a dig at the BJP amid ensuing assembly elections in the state, he said, “Farmers and their families have suffered a lot because of their (BJP) policies, this will result in BJP’s defeat. Lakhimpur Kheri case is reminding us of Jallianwala Bagh incident in independent India.”

Earlier in the day, when Mr Yadav was campaigning in Lakhimpur Kheri, the SP chief said Ashish Mishra was given bail in a hurry as the ruling BJP knew that the state government will change. Notably, Ashish Mishra is the son of Union Minister of State in Home Affairs Ajay Kumar Mishra.

“BJP gave a hurried bail to the accused Ashish Mishra because they knew the government is going to change in UP… If farm laws were taken back, this means Yogi Adityanath will also have to go back,” the SP chief said while addressing the public here.

Eight people, including four farmers, had died in violence on October 3 last year in Lakhimpur Kheri.

Exuding confidence in SP and its alliance’s win in the assembly elections, Mr Yadav said, “People will give a full majority to Samajwadi Party & its alliance by the conclusion of the fourth phase. They (BJP) promised to double the income of farmers in UP. Not even a single farmer in the state has benefited from their schemes.”

Two phases of the seven phased polling for the 403-member Uttar Pradesh Assembly have been completed. The third phase of the elections is scheduled for February 20.

The counting of votes will take place on March 10.