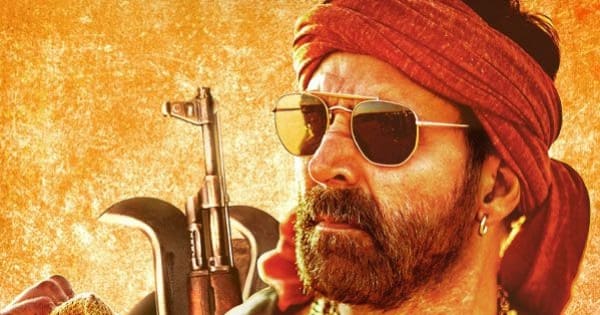 Akshay Kumar reignited theatres with Sooryavanshi during the film industry’s most difficult period – immediately after theatrical restrictions were relaxed post the second wave of the COVID-19 pandemic. Will the superstar recreate the same magic with his new theatrical release, Bachchhan Paandey, with Kriti Sanon, Arshad Warsi, Jacqueline Fernandez and Pankaj Tripathi for the company this time around? The movie even has a Sooryavanshi connect, with that movie’s dialogue writer, Farhad Samji having taken up the directorial reigns for Bachchhan Paandey. So what’s the verdict? Well, it’s interval time as I decided to catch the film’s first-day-first-show on Holi so that y’all can enjoy the festival of colours and also get all the latest updates on the Akshay Kumar starrer. Here’s the half-time verdict for now… Also Read – Sooryavanshi on Diwali, Kesari on Holi and more; Here’s how Akshay Kumar starrers have performed at the box office on festive weekends

Positives: First things first, Bachchhan Paandey has enough going for it to entertain both those who’ve watched the 2014 Tamil original, Jigarthanda, as well as first-time viewers. Second things second, it’s a paisa-vasool treat (at least till the interval point for now) for Akshay Kumar fans as the actor takes on his coolest role since 2012’s Rowdy Rathore, and goes no-holds-barred with his swag while also subtly reminding discerning movie-buffs what a fine actor he is with his diction and body language. Kriti Sanon, too, add another meaty role and credible performance to her enviably growing repertoire while Arshad Warsi, as always, doesn’t surprise us one bit with his effortless coming timing. Abhimanyu Singh, Prateik Babbar and Sanjay Mishra are also all on the money. Also Read – Trending Entertainment News Today: Ananya Panday BRUTALLY trolled sheer outfit; did Amitabh Bachchan praise The Kashmir Files?

The dialogues are a hoot and some smart changes have been infused to ensure Bachchhan Paandey retains the essence of its source material while forging its own identity, which is always a tough job for remakes, so kudos to the makers for that – the deviation from the serious tone to a dark comedy is more than welcome, particularly for the family audience during a festive release, as is the added backstory. Keeping the de, infectious background score though was a good choice. Charu Shree Roy’s editing keeps the narrative snappy, Gavemic U. Ary’s camerawork captures the rustic flavour to the T and the production values are as polished as one would expect from a Sajid Nadiadwala production. The songs so far, especially the Saare Bolo Bewafa track, make the right noise. Also Read – Before Bachchhan Paandey, check out Akshay Kumar movies like Hera Pheri, Rowdy Rathore and more that were South remakes

Negatives: For a gangster movie, there’s a distinct lack of action scenes or even some remotely deadly sequences. Moreover, while funny, there was scope for more humour in the first half, and I’m hoping the second half does that.

Half-time verdict: Till now, Bachchhan Paandey is going along fine as a perfect festival watch for the entire family. Over now to the second half.