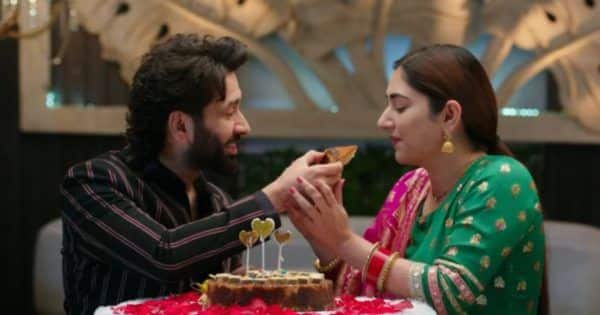 Bade Achhe Lagte Hain 2 fans are loving how the chemistry between Ram Kapoor (Nakuul Mehta) and Priya (Priya Sood) is slowly building up. We saw a sequence where Priya makes arrangements for the perfect party. Ram gets roses for her. Nakuul Mehta and Disha Parmar are looking too cute. In fact, people feel that Disha Parmar is slaying the current sequences. Ram is very touched as Priya got him his favourite cake. He tells her that she would be loved by his father if he was alive. Priya says that no one told her that she is a cute person. She says everyone said that she was rude. Ram (Nakuul Mehta) also feeds her the cake and they look at the rains together. Also Read – Naagin 6 new promo: It’s serpent vs Covid; fans start guessing, ‘Kon hai bhaiya? Rubina or Nia?’

People are totally thrilled. They are discussing how Ram and Priya properly describe the journey of a newly married couple in an arranged marriage set-up. It all starts from hesitancy as a couple tries to adjust to the changing dynamics of what circumstances throw at them. Take a look at the tweets… Also Read – Trending TV News Today: Avinash Sachdeva REACTS on split with Palak Purswani, Gauahar Khan SLAMS Karan Kundrra’s ‘stupid’ remark for Pratik Sehajpal’s mom and more

Her hand on his chest. These little things just melt my heart like anything mahnnn ???#BadeAchheLagteHain2 #RamYa #BALH2 pic.twitter.com/vYJV9axH31

Priya told Ram she fears to lose everyone and everything Ram also feels the same ?? #RamYa #BadeAchheLagteHain2 #NakuulMehta #DishaParmar pic.twitter.com/dvEpuqZ8t8

I’m 500% sure it will happen. Once they confess their feelings & recollect some random past convo it will come up & they will realize it was them. #BadeAchheLagteHain2

Given how fans are reacting, it looks like Nakuul Mehta and Disha Parmar’s show should see brighter ratings. The low TRPs have been a matter of concern for the channel and production house! Also Read – Bade Achhe Lagte Hain 2: Ram wants to break Priya’s rejection streak; RaYa fans impressed with acting chops of Disha Parmar – view tweets