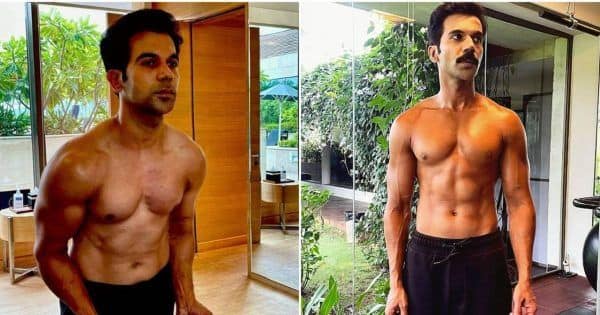 Rajkummar Rao has played myriad character in a career that is still just over a decade long. However, the one thing that he has hitherto not done is play a character that’s all macho on screen. The closest he has come to doing so was in the second half of Bareilly Ki Barfi, but in that, too, the actor didn’t ever go so far as to drop his shirt and flaunt his physique because Rajkummar Rao has built his career in Bollywood by playing easily identifiable, common-man parts. Now, for the first time, he’s taking a detour, having bulked up and even flaunting 6-pack abs in his upcoming movie, Badhaai Do. Also Read – Trending OTT News Today: Soulful Gehraiyaan title track, gritty Raktanchal 2 trailer, Kangana Ranaut’s OTT debut and more

So, we were curious to know why he finally decided to go a bit larger than life in Badhaai Do and got the perfect opportunity to quiz the actor in an exclusive interview. Opening up on his physical change, Rajkummar Rao said, “It was completely for the demands of the character. It’s not like I woke up one day and thought that I, too, needed to build my biceps or flaunt 6-pack abs. The role demanded it. It’s a very important part of my character’s journey and his mental space in the film and when you see Badhaai Do, you’ll totally understand why.” Also Read – Deepika Padukone’s Gehraiyaan to Rajkummar Rao’s Badhaai Do – complete list of Bollywood movies releasing in theatres and OTT in February 2022

Badhaai Do is a quasi-sequel to 2018’s blockbuster, Baddhaai Ho, with a new cast, new characters and the story going in a completely different direction. Directed by Harshavardhan Kulkarni of 2015’s Hunterrr fame, the movie also stars Bhumi Pednekar as the female lead while Seema Pahwa and Sheeba Chaddha are seen in storng supporting roles. Also Read – Dulquer Salmaan to make his OTT debut with Rajkummar Rao in Guns & Gulaab