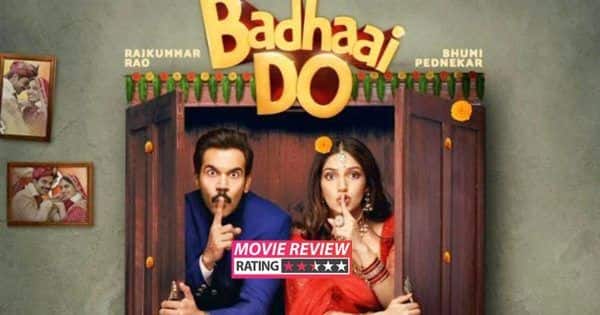 Bollywood has finally woken up on how to depict homosexuality or just the LGBTQ+ community as a whole. A couple of months ago there was the mightily entertaining and extremely topical Chandigarh Kare Aashiqui and now comes equally topical Badhaai Ho, which should definitely see some people question their outlook toward homosexuals, if not change it altogether. But being topical and initiating change, however little, is one thing, and making a film is a different ball game entirely. So, how does Rajkummar Rao and Bhumi Pednekar starrer Badhaai Do, directed by Harshvardhan Kulkarni, score on that front? Suffice it to say that while it gets full marks for its subject, the presentation isn’t always a smooth ride.

Shardul Thakur (Rajkummar Rao), a cop, and Sumi Singh (Bhumi Pednekar), a PT teacher, decide to enter a marriage of convenience as a means to freely continue living on their own terms as homosexuals, with whomever they choose to physically and emotionally love, sans the constant scrutiny from family and society. However, things prove to be not as easy as envisioned.

Watch the Badhaai Do trailer below:

The subject matter of homosexuality is handled with utmost care and sensitivity, with some scenes either genuinely tugging at your heartstrings or compelling you to sit up straight and empathise with the plight of the gay community. Rajkummar Rao’s role is etched with brilliant shades, highlighting how one doesn’t need to be straight to be a male chauvinist, and he’s competent in it while Bhumi Pednekar lends gravitas to her part despite it not being as deep as that of her costar’s. Chum Darang, Sheeba Chaddha, Seema Pahwa offer excellent support, with the latter displaying how you can hate a character even in a small, undercooked part, while Gulshan Devaiah excels in a cameo from the moment he enters the scene. Swapnil Sonawane’s cinematography, though nothing to marvel, passes muster and the songs and background score are also pleasing to the ears despite never making a huge impact.

As sensitive and empathetic as Badhaai Do is, it never comes together as a film primarily because Director Harshvardhan Kulkarni and his co-writers, Suman Adhikary and Akshat Ghildial, are slightly confused about whether to completely deliver an art film or balance it with mainstream elements, and in the bargain, the plot gets lost in translation, with tonal shifts that jar the narrative. Honestly speaking, an out-an-out artistic approach should’ve been employed as that where the film is constantly leaning to. Moreover, without giving anything away, some of the scenes seem extremely far-fetched, whereas logic goes for a toss in other instances, both of which are quite surprising, especially when you