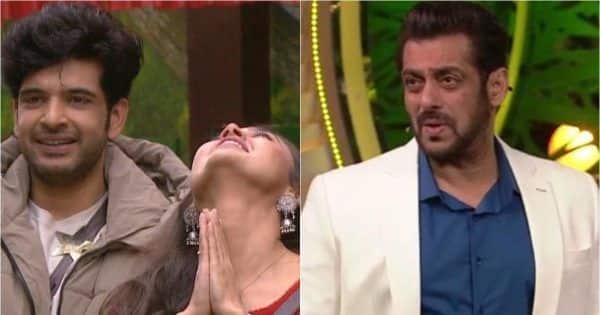 On the recent Weekend Ka Vaar episode of Bigg Boss 15, Salman Khan slammed Karan Kundrra for never taking any stand for Tejasswi Prakash and asking her to apologise to Umar Riaz always. He told Tejasswi that Karan has never made her his priority in the game despite being her boyfriend. Salman also went on to call Karan a toxic boyfriend on national television. While Karan looked visibly hurt on the show, his mother Suneeta Kundrra was also shocked to see Salman being so harsh on her son. Also Read – Bigg Boss 15, Day 109, Live Updates: Tejasswi Prakash and Abhijit Bichukale lock horns during a task

Addressing the heavy bashing that Karan received from Salman on Bigg Boss 15, Suneeta told TOI, “I felt Salman Khan was too harsh on him (father pitches in, she’s speaking as a mother). I couldn’t sleep that night If he’s helping someone, they will bash him saying why are you helping. If he plays for himself, he gets questioned about and also bashed that why are you not standing for your friends. The day he was heavily bashed he was asked why doesn’t he stand for Tejasswi and 15 minutes later into the show Tejasswi was asked to play for herself. He’s stuck in duality.” Also Read – Zareen Khan says she cannot be a monkey on Salman Khan’s back: ‘A lot of people still have that assumption’

She further added, “It was shocking for me when I heard he was called a toxic boyfriend, but then he is Salman Khan. What can we say. Someone even told me that Salman Khan was trying to wake him up and you should not feel bad about it. I would rather want him to sleep than be woken up like this on national television. We have seen how so many people come up to him in that house and talk about their problems and he solves it in a beautiful way. They go back happily. We are very proud that he has played the game in a dignified way.” Also Read – Hrithik Roshan, Kareena Kapoor Khan and more drunk Bollywood celebs that will leave you in splits – view pics

Karan’s mother’s reaction came after Karan introduced Tejasswi to his parents and asked them about their views in a recent episode. Both Karan and Tejasswi were jumping in joy when their families approved of their relationship over a video call. Karan’s parents said she is the heart of our family and hearing this Karan told Tejasswi, “They never said anything like this to any girl.” Tejasswi’s brother also informed her that even their mother likes Karan. He said, “Karan now she is your responsibility.”