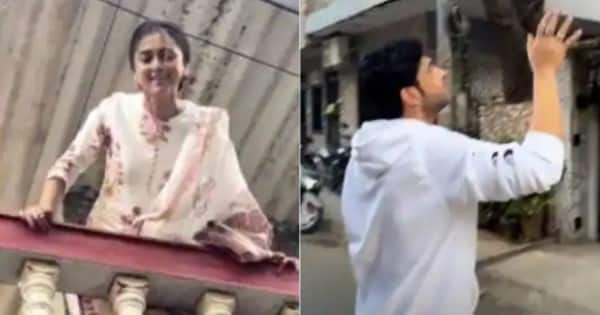 Popular TV actor Karan Kundrra recently visited his girlfriend and Bigg Boss 15 winner, Tejasswi Prakash, at her home in Mumbai on Monday. Karan took to his Instagram stories and shared a few clips wherein he drove in his car towards Tejasswi’s house. In the video, Karan said, “Whatsup people. How’s everything? I’ve finally come out of my cocoon and guess where I’m headed. You’ll know soon.” As soon as Karan stepped out of his car, Tejasswi was waiting for him on the balcony of her home. Also Read – Bigg Boss 15 runner-up Pratik Sehajpal Reacts to netizens calling Tejasswi Prakash a biased winner, ‘I would not like to question…’ [Exclusive]

Karan and Tejasswi met on the Bigg Boss 15 show and within no time fell for each other. Recently, during family visits inside the house, their respective families approved of their relationship.

Tejasswi was announced as the season winner for Bigg Boss and she lifted the trophy and took home the cash prize of Rs. 40 Lakhs. Pratik Sehajpal became the first runner-up, while Karan was the second runner-up. On the work front, Tejasswi will be seen playing the lead role in Naagin 6.