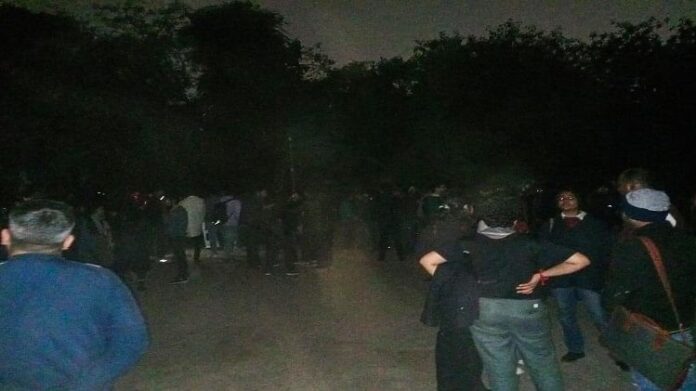 Uproar broke out at Jawaharlal Nehru University over the screening of controversial BBC documentary on Prime Minister Modi. The matter escalated to such an extent that there was stone pelting among the students and heavy security force had to be present. Presently screening matter JNU Students Union President and union people alleging that why the blackout was done in the university. The allegation of the student union is that apart from internet and electricity, other essential facilities were also stopped by the administration and people of many organizations including ABVP created ruckus at the campus gate. While JNU ABVP President Rohit says that his organization has nothing to do in this whole matter. He has also demanded the administration to register an FIR regarding stone pelting and deteriorating atmosphere in the campus.

ABVP said, we have nothing to do with the matter

Talking to amarujala.com, JNU ABVP President Rohit said that his organization has nothing to do with this matter. He said that it is the job of the administration to see that the campus environment does not deteriorate. Rohit says that the administration had issued an advisory in the day itself and talked about taking strict action against any such screening or any kind of act. He says that now the administration should register an FIR against those who have spoiled the atmosphere in the campus. On the question of whether ABVP will do any further movement in this matter, Rohit says that in this matter his organization has nothing to do with any method. Although Bhaiya definitely says that his organization has always opposed any act that tarnishes the image of the country and will continue to do so in the future. Since the administration in the campus had already issued an advisory in this entire matter, screening of the banned documentary on the Prime Minister of the country Narendra Modi was done to vitiate the atmosphere. Now they demand that the culprits should be identified and action taken against them.

Aishi Ghosh said, there was infiltration of outside students

Aishe Ghosh, president of the JNU Students’ Union, says that outside students infiltrated the campus to vitiate the atmosphere. He asked why electricity and internet were suspended in the campus. He alleges that the administration has full responsibility for the manner in which the situation developed late on Tuesday night. She says that what was the reason that stones were pelted inside the campus and the facilities they needed were stalled. A senior JNU official related to administrative affairs says that when the banned documentary was not allowed, then trying to crowd there and show the documentary by distributing QR codes on mobiles and laptops is completely illegal. He says that he is investigating the whole matter as to when and how the dispute started. However, JNU President Aishe Ghosh was present among the students during this period.

In fact, despite a warning issued by the JNU administration on Monday, a group of students at the Jawaharlal Nehru University tried to screen the banned BBC documentary on Prime Minister Narendra Modi on late Tuesday evening. An administrative official associated with JNU says that when this documentary itself is banned, there is no point in allowing it to be screened. Despite this, a group of students organized a late evening screening on the campus. The atmosphere started deteriorating from here. According to the information received from the JNU administration, when the information about this method of documentary came to their notice, while issuing advisory, they had also talked about taking strict action against those who screen any such method.