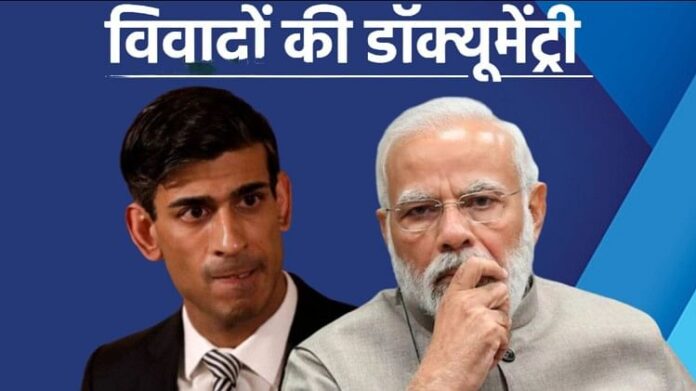 There was a lot of ruckus in Delhi-based Jawaharlal Nehru University i.e. JNU (JNU) over the screening of BBC’s controversial documentary on PM Modi. During this, allegations of stone pelting were also made by the student groups. However, no statement has been issued by the police so far. In fact, questions are being raised from the very beginning on the controversial documentary on Prime Minister Narendra Modi by the British media company BBC. People of Indian origin living in Britain are also angry about this documentary. People are calling it part of a bigger conspiracy. Even the Prime Minister of Britain has given clarification in this matter. Let’s try to know why BBC also made this documentary on Prime Minister Narendra Modi? What did the British government say on this whole issue? What was the reaction of the Government of India?

First know what is in the BBC documentary?

British broadcaster BBC has created a new two-part series titled India: The Modi Question. Its first part has been released on Tuesday. In this series, talks have been done on the political journey of Prime Minister Narendra Modi in the early days. At the same time, his association with the Rashtriya Swayamsevak Sangh, his rising stature in the BJP and his appointment as the Chief Minister of Gujarat have also been discussed in it. The most talked about in the entire series is the riots that took place in Gujarat when Modi was the Chief Minister. This series was not broadcast in India, but it was run by BBC in many countries of the world including London. Controversy arose regarding this. Its second part was to be released on 24 January.

What’s happening on documentaries in the UK?

Strong opposition to this BBC documentary has started in Britain. A large number of Indian people have filed online petitions against the BBC. Apart from this, people of Indian origin living in Britain are now getting the subscription of BBC canceled.

A large number of Indian and British institutions have expressed their objection by writing letters to the management and editor of BBC. People say that BBC is deliberately trying to defame India and Britain. BBC’s thinking is biased. Gayatri, president of ‘The Reach India’ organisation, had said that if the second part of this documentary on PM Modi comes on January 24, people will protest on the streets.

What do Indians living in Britain have to say?

For this, we spoke to Gayatri, president of ‘The Reach India’ organization fighting for the rights of the Indian community in London. Gayatri also works for a consultancy in the field of cyber security in London. He said, ‘The BBC documentary has come at a time when for the first time a person of Indian origin has been elected Prime Minister in Britain. When Rishi was elected Prime Minister, Britain was surrounded by many problems. On one side the Russia-Ukraine war was going on and on the other hand there was a period of economic crisis in the country. Rishi took several concrete steps to deal with these problems. Now things have started becoming normal. After the arrival of Rishi, the relationship between India and Britain has started moving towards more strength. Many people are not liking this thing. This is the reason why Hindu and anti-India forces are trying to destabilize Rishi Sunak’s government in one way or the other. Gayatri describes the BBC documentary as part of a larger conspiracy in three points.

1. Conspiracy to destabilize Britain’s Rishi Sunak government: Gayatri says, “After a long time there is stability in the UK under the leadership of Rishi Sunak. Rishi has done the work of rescuing the country from many kinds of crisis, so he cannot directly target him. In such a situation, the opposition party has adopted this method. The Pakistani-origin MP who raised the issue of the BBC documentary in the UK Parliament is from the Labor Party. In such a situation, it is clear that the target of this documentary of the Labor Party and BBC is not only the Indian Prime Minister, but the British Prime Minister Rishi Sunak. He is trying to tell through this that Hindus are intolerant.

2. India-UK trade deal on target: Gayatri says, ‘There is going to be a big trade deal between India and Britain. It is possible that BBC has tried to block that trade deal through this documentary. If this deal is done then both the countries will benefit from it. In such a situation, this kind of documentary may have been done deliberately.

3. ISIS terrorist as hero and Prime Minister defamed: According to Gayatri, questions are also being raised on the thinking of BBC because, some time back, they had interviewed Shamima Begum, the wife of a terrorist of the terrorist organization ISIS. In this interview, BBC has shown many positive things about the terrorist organization ISIS. In this, Shamima Begum was presented as a destitute. It is shown how Shamima came back to Britain after the bad condition of ISIS. And on the other hand, through a documentary, an attempt was made to malign the character of the Prime Minister of India, the world’s largest democratic country.

Strong opposition to this BBC documentary has started in Britain. A large number of Indian people have filed online petitions against the BBC. Apart from this, people of Indian origin living in Britain are now getting the subscription of BBC canceled.

A large number of Indian and British institutions have expressed their objection by writing letters to the management and editor of BBC. People say that BBC is deliberately trying to defame India and Britain. BBC’s thinking is biased. Gayatri, president of ‘The Reach India’ organization, says that after the release of the second part of this documentary on PM Modi on January 24, people will protest on the streets.

What did the Indian Ministry of External Affairs say on the series?

Regarding the documentary released by BBC, Foreign Ministry spokesman Arindam Bagchi said that we think it is part of a propaganda. It has no objectivity. Describing it as biased, he said that ‘note that it has not been displayed in India’.

The Ministry of External Affairs has said that we think this is a propaganda material, designed to push a particular story. The bias, lack of objectivity and colonial mindset are clearly visible in this. He said that this film or documentary is a reflection of the agency and individuals who are spreading this story again.

Referring to the comments made by former UK Secretary of State Jack Straw in the documentary series, Bagchi said that he (Jack Straw) seems to be referring to some internal UK report. How can I reach there? This is a 20 year old report.

What did the Prime Minister of Britain say?

On Thursday, Pakistan-origin Labor Party MP Imran Hussain raised the issue in the UK Parliament. After this, British Prime Minister Rishi Sunak defended his counterpart Narendra Modi. He had said that he did not agree with the characterization of his Indian counterpart. He said the UK government’s position on this has been clear and long-standing and has not changed. Further, Sunak said, ‘Of course we do not tolerate harassment, wherever it may be, but I do not agree at all with the characterization that has been put forward about Narendra Modi.’

What was the clarification given by BBC?

On the other hand, on Friday, BBC defended its controversial documentary on Prime Minister Narendra Modi. A BBC spokesman said it was a ‘deeply researched’ documentary which sought to highlight important issues. “The documentary was thoroughly researched in accordance with the highest editorial standards,” the spokesperson said in a statement.