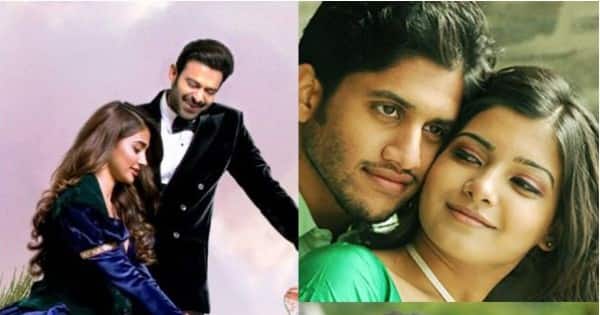 Prabhas and Pooja Hegde starrer Radhe Shyam was released on 11th March 2022. The film mainly received negative reviews and didn’t do well at the box office. The Radha Krishna Kumar directorial is all set to premiere on Amazon Prime Video on 1st April 2022, within one month of its release. Well, Prabhas and Pooja Hegde’s fans are excited to watch the film on the OTT platform. But, before Radhe Shyam hits the big screen, here are 5 popular Telugu romantic films that you can watch on streaming platforms. Also Read – Oscars 2022 slapgate: Nakuul Mehta REACTS to Will Smith slapping Chris Rock with a witty video; says, ‘Make Reels Not Violence’

Ye Maaya Chesave (Zee5)
Naga Chaitanya and Samantha Ruth Prabhu starrer Ye Maaya Chesave is undoubtedly one of the best romantic films made in Tollywood. Chai and Sam’s chemistry in the film was a highlight and you can watch the movie now on Zee5. Also Read – Liger: Producer Charmme Kaur gives a MAJOR Update about Vijay Deverakonda starrer; says, ‘I can promise you DHAMAKA’

Arjun Reddy (Disney+ Hotstar)
Arjun Reddy starring Vijay Deverakonda and Shalini Pandey was one of the biggest hits of 2017. The film was even remade in Hindi with Shahid Kapoor and Kiara Advani, and the Hindi remake also did exceptionally well at the box office. Arjun Reddy is streaming on Disney+ Hotstar. Also Read – The Kashmir Files director Vivek Agnihotri is NOT doing a film with Kangana Ranaut; says, ‘My films don’t need stars, they need actors’

Uppena (Netflix)
Panja Vaisshnav Tej, Krithi Shetty, and Vijay Sethupathi starrer Uppena was a super hit at the box office. It marked Vaisshnav and Krithi’s acting debut, and they impressed one and all with their performance in the movie. Uppena is streaming on Netflix.

Love Story (aha)
2021 release Love Story starring Naga Chaitanya and Sai Pallavi was loved by one and all. The movie did fantastic business at the box office, and you can now watch the film on aha.

Shyam Singha Roy (Netflix)
Shyam Singha Roy ended 2021 with a bang. The film was released on Christmas weekend and did well at the box office. You can enjoy this love story on Netflix.