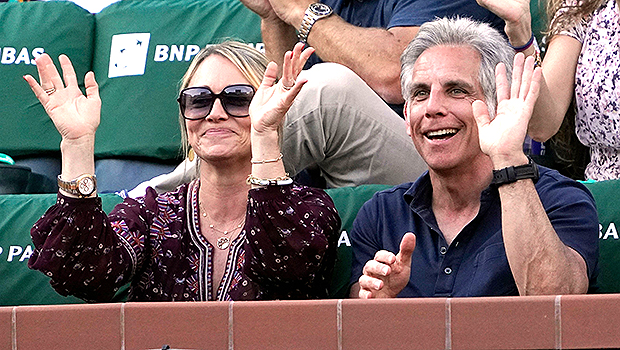 Ben Stiller and Christine Taylor looked super sweet together as they sat side-by-side at a tennis match in their first pics together since the ‘Zoolander’ actor announced they had gotten back together.

It’s clear that Ben Stiller and Christine Taylor are head-over-heels after rekindling their marriage as evidenced in their first public pictures. The couple attended the BNP Paribas Open in Indian Wells, California on Wednesday, March 16. The two beamed as they sat side-by-side while watching Spain’s Rafael Nadal play against U.S. tennis star Reilly Opelk.

Ben gave a friendly wave as he wore a navy blue polo shirt while Christine held her hands up. The Brady Bunch actress rocked a fun red floral print shirt and a pair of oversized sunglasses. Most importantly, the two seem to be enjoying each other’s company in their first public outing together. The Zoolander actor revealed that he and his estranged wife got back together during an interview in February.

He revealed that he moved back in with Christine and their kids, Ella Olivia Stiller, 19, and Quinlin Dempsey Stiller, 16, during the coronavirus pandemic to quarantine and that’s when they realized they wanted to give their marriage another shot. “Over the course of time, it evolved,” Ben told Esquire of their blossoming romance.”We were separated and got back together and we’re happy about that. It’s been really wonderful for all of us. Unexpected, and one of the things that came out of the pandemic.”

“I think we have a respect for the ways that we’re similar and the ways we’re different,” he continued. “And I think accepting that, you can really appreciate someone more because you’re not trying to get them to change for you. Once you accept that, you save a lot of energy.” The pair initially got married in 2000 and separated after 17 years of marriage in 2017.

Even after their separation, the two remained good friends and worked together to co-parent their teenagers very well. Because of this, many of their close friends weren’t too surprised to learn that the pair had gotten back together. “Christine’s friends aren’t surprised one bit that she and Ben are back together,” a source close to the actress EXCLUSIVELY told HollywoodLife. “Everyone was so upset when they broke up because they really did seem like the perfect couple.”