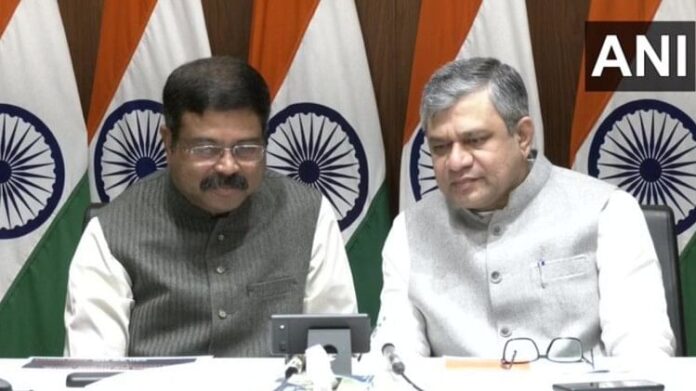 Union Minister for Communications, Electronics and Information Technology Ashwini Vaishnav and Union Education Minister Dharmendra Pradhan on Tuesday (January 24) tested the indigenous mobile operating system (OS) BharOS. This mobile OS has been developed by the incubated firm of the Indian Institute of Technology Madras (IIT Madras). This software can be installed on commercial off-the-shelf handsets.


Union IT Minister Ashwini Vaishnav said on the indigenous mobile operating system ‘Bharosa’ that there will be difficulties in this journey and there are many people around the world who will bring difficulties and will not want such a system to be successful. We have to work towards making it successful with great care and persistent effort. The Union Minister has described the trust as ‘Bharosa’.

BharOS, also known as Bharos, is an indigenous mobile operating system. This mobile operating system has been developed by the incubated firm of the Indian Institute of Technology Madras (IIT Madras). It is being claimed to benefit 100 crore mobile phone users of India regarding this OS. The special thing about this OS is that it comes with hi-tech security and privacy. That is, in this mobile operating system, users get more freedom, control and flexibility to choose and use apps according to their needs. BharOS can be installed on commercial off-the-shelf devices.

Also, the trust comes with no default apps (NDA). This means that users are not forced to use apps that they are not familiar with or do not consider safe in terms of security and cannot trust those apps. The native OS gives users more control over the apps they have on their device. Not only this, users can also select the apps that they want to give access to access certain features or data on their device. Simply put, users have more control in this operating system.

Trust allows access only to trusted apps from the organization-specific Private App Store Service (PASS). In fact, PASS allows access to a curated list of apps that have been thoroughly vetted and meet certain security and privacy standards of the organization. This means users can be sure that the apps they install on their devices are safe to use and have been tested for any potential security vulnerabilities or privacy concerns.