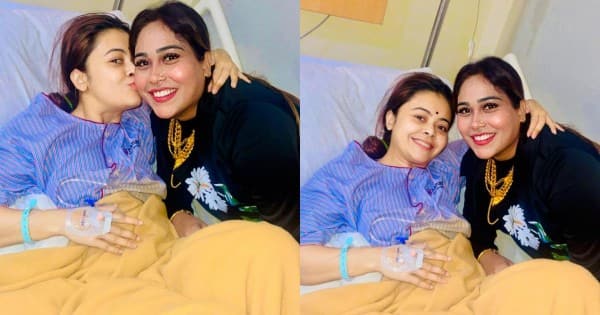 Bigg Boss 15’s ex-contestant Devoleena Bhattacharjee got evicted from the house just a few days before the grand finale. Post her eviction, Devoleena went live on Instagram and informed her fans that she has got a serious injury during a task and will undergo operation. “My health is serious. 19 ghanta bhaari padh gaya. That fall…Injury…Damage zyada ho gaya hai”, said Devoleena during her live session. She even added saying, “I will get admitted to a hospital on Thursday. The operation is scheduled for Friday.” Devoleena has been admitted to a hospital in Mumbai and Bigg Boss 15’s ex-contestant and singer Afsana Khan visited her. Afsana took to her Instagram and shared a glimpse of her visit. In the video, Afsana and Devoleena were seen hugging each other. Afsana even prayed for Devoleena’s speedy recovery. Sharing the video, Afsana wrote, “Love u @devoleena Get well soon sab pray kro ????????❤️???????? guys”. Devoleena commented on the video with a bunch of red heart emojis. Also Read – Bigg Boss 15: As Shehnaaz Gill pays tribute to Sidharth Shukla, a look at 5 SidNaaz moments that will leave everyone in tears [VIEW PICS]

In the Bigg Boss 15 house, Devoleena and Afsana never met each other. Devoleena entered the house post Afsana’s eviction. But, Devoleena had always rooted for Afsana and supported her. Also Read – Bigg Boss 15 ex contestant Vishal Kotian REACTS to Sidharth Shukla’s family’s statement against him

Director, producer Lakshmi R Iyer wrote a heartfelt note for Devoleena and it reads, “My fighter girl, Devoleena. Wishing her all the love and strength for her surgery tomorrow…Just want to say I love Devo and so happy to see you smile in person…Get well soon.”

For the uninitiated, Devoleena and Rashami performed a task for Ticket To Finale for 19 hours as the two were standing on a pole. Devoleena gave details about her surgery and told her fans, I will fight this but am tensed about it. It’s just that I need your prayers (begins to cry). I wanted to talk to you all before getting admitted. Time kharab chal raha hai but is mein bhi kuch acha hi hoga mera.”