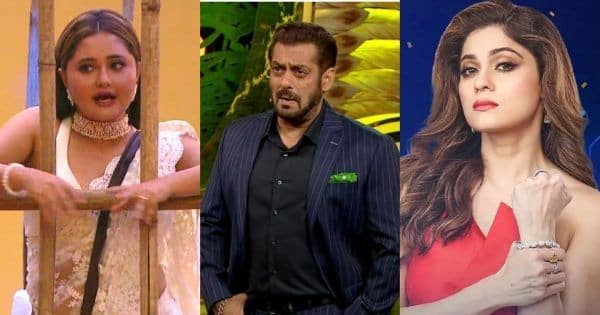 Bigg Boss 15 FINALE, 29th January 2022, Day 119 Live Updates: Tonight’s episode of Bigg Boss 15 began with a bang as host Salman Khan announced a shock elimination, with Rashami Desai being instructed to leave the house and join her mother outside as all the mothers were brought in by the show to support the finalists in the Bigg Boss house. It didn’t end there, with Salman Khan introducing more surprise guests outside the house, including several ex-contestants of the season, and needles to say, things got very heated, very soon.

Salman Khan announced that there’s the first elimination of Bigg Boss 15 finale will happen at the beginning of the show itself, and Rashami Desai was the unlucky one to bite the dust. He instructed her to join her mother outside the house as all the finalists’ mothers were invited as guests.

Along with the finalists’ mother, host Salman Khan revealed some other special guests, which included some of the ex-contestants of this season.

It didn’t take long for things to heat up, with Raqesh Bapat wasting no in questioning Tejasswi Prakash for her age-shaming comments against girlfriend Shamita Shetty, elaborating how it made him infuriated enough to want to break his TV at home. He added how hurt he was, too, as he thought Tejasswi respected him after the bond they had formed inside the house, and just couldn’t fathom how she could doubt Shamita’s intentions with Karan Kundrra. The latter then jumped in to defend his girlfriend, but Shamita Shetty then raised her voice and told him to embrace the truth over loyalty. Rashami Desai then diffused the situation by stating that it was Kundrra who deliberately created friction between Shamita Shetty and Tejasswi Prakash, which he agreed sans hesitation.

Salman asked Shamita and Raqesh comment on each other, and they had no qualms in publicly professing their love, to which the host asked them to remember that the former’s mother, Sunanda Shetty, was in attendance, but she revealed she had no issues as long as her daughter’s happy.

Shamita Shetty and Tejasswi Prakash again flare up after the latter refuses to accept that her age-shaming comment was directed at Shamita, who then tells Karan Kundrra that “his girlfriend has again lost the plot.” Pratik Sehajpal then asks Shamita to maybe consider giving Tejasswi the benefit of doubt and end the fight as it’s leading nowhere.