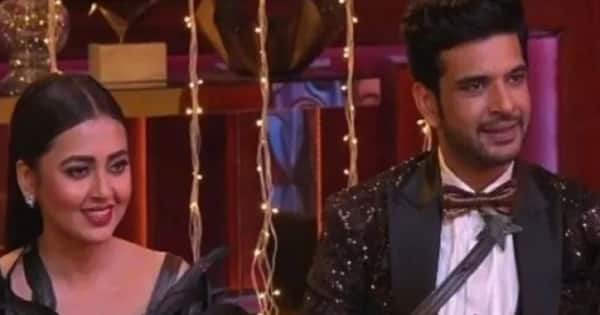 Bigg Boss 15 is coming to an end and in today’s episode, we saw how Rashami Desai got eliminated. Later in the episode, we saw Raqesh slamming Tejasswi for calling Shamita Shetty aunty and being insecure about her boyfriend Karan Kundrra. Amid this Shamita and Tejasswi once again indulges in a verbal fight where Teja defends herself by saying that she isn’t insecure about Shamita and is very well aware of how much she loves Raqesh. The verbal argument gets heated and the host of the show Salman Khan tries to calm both of them, while Shamita keeps quiet and Tejasswi keeps on talking, to which Salman says, Kundrra’ apni girlfriend ko shaant karo”. Karan plants a kiss on Tejas’ cheek and makes her calm. While everyone lauded this move of Karan including Salman, we could see Tejasswi’s father visibly a tad embarrassed with this move of Karan. Also Read – Bigg Boss 15 TOP 5 contestants: Tejasswi Prakash defeats Karan Kundrra and others on Ormax list

Tejasswi’s parents looked extremely sober and simple, while Karan planted a kiss on Teja’s cheek, the camera was panned on Teja’s father, he humbly folded his hands towards it. This gesture of her father definitely won hearts. While later we see Raqesh explaining to Teja that he is hurt with her age shaming Shamita and on a lighter note he said she doesn’t even look like aunty. However the verbal fight inside the house continued, Karan defended his girlfriend saying that she didn’t age shame her and Shamita was fuming with anger and concluded her fight with Teja calling her shameless and stupid. In the coming episode we see Bigg Boss ex winners entering the house giving the contestant an option to take rupees 10 lakh cash and leave the trophy. We will also see Shehnaaz Gill paying her tribute to Sidharth Shukla. Stay tuned! Also Read – Bigg Boss 15: Karan Kundrra REPEATS Aly Goni, Vikas Gupta, Sreesanth’s finale outfit,; netizens say, ‘Budget nahi baaki BB ke paas’