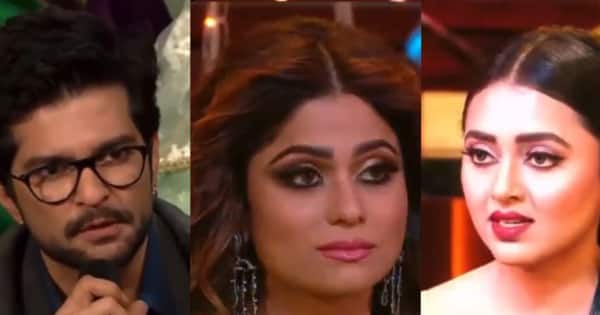 For the grand finale of Bigg Boss 15, we will see supporters of all the contestants gracing the stage. For Shamita Shetty, we will see her mother and boyfriend Raqesh Bapat seated in the audience. In the new promo of the show, we see Raqesh Bapat slamming Tejasswi Prakash for going against Shamita Shetty. In the past, both the ladies have had major arguments surrounding Karan Kundrra. Tejasswi feels that Shamita has a few feelings for Karan Kundrra and she does not like it. In the promo video, we see Raqesh Bapat commenting on Karan and Shamita’s bond. Also Read – TV News Weekly RECAP: Mouni Roy-Suraj Nambiar get married, truth behind Shweta Tiwari’s ‘bra ki size’ remark, Sidharth Shukla’s family’s statement and more

Raqesh Bapat asks Tejasswi Prakash ‘why were you doing all this?’ He then goes on to say that Shamita Shetty is not interested in Karan Kundrra. Raqesh also mentioned that he felt like breaking the TV as he was that angry with Tejasswi Prakash. In her defence, she says that it was a reaction to an action. To this, Raqesh says that ‘it is all bullsh*t’. Tejasswi and Shamita can be seen fighting later on. Watch the promo below: Also Read – Bigg Boss 15: Karan Kundrra-Tejasswi Prakash, Pratik Sehajpal-Akasa Singh and more – contestants who raised brows with their romance – view pics

Now, among the top 6 contestants in the running to pick the trophy are Tejasswi Prakash, Karan Kundrra, Shamita Shetty, Pratik Sehajpal, Nishant Bhat and Rashami Desai. During the grand finale we will see many celebrities gracing the show. We will also see Shehnaaz Gill paying a tribute to Sidharth Shukla and recalling their beautiful journey. The Grand Finale of Bigg Boss 15 appears to be pretty interesting to so far. Who do you think will win the season?Bigg Also Read – Bigg Boss 15: Rhea Chakraborty, Surbhi Chandna and 8 more celebs who refused to do be part of Salman Khan’s show – view pics