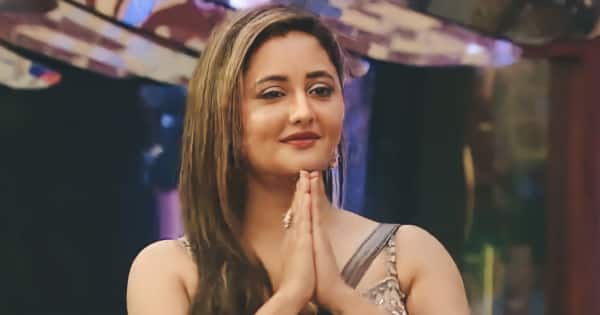 The grand finale of Bigg Boss 15 is going to take place today and we shall see many known faces gracing the event. From Gauahar Khan to Urvashi Dholakia and Shweta Tiwari – we shall see the previous winners of the show performing at the Grand Finale of Bigg Boss 15. In the race to win the trophy are Shamita Shetty, Karan Kundrra, Pratik Sehajpal, Nishant Bhat, Tejasswi Prakash and Rashami Desai. However, now it seems, one of them has been eliminated from the show. If the latest social media updates are anything to go by, Rashami Desai seems to be out of the race. Also Read – Bigg Boss 15 Grand Finale: Raqesh Bapat slams Tejasswi Prakash for her ‘bullsh*t; says Shamita Shetty is not interested in Karan Kundrra

In the picture that has made its way to the internet we see Rashami Desai talking to Salman Khan. The outfit is the same as that she wore for the Bigg Boss 15 grand finale. Plus an Instagram page called bigg.boss15.updates has claimed that the actress has been eliminated from the show. However, there is no confirmation on this as yet. Also Read – Bigg Boss 15: Karan Kundrra-Tejasswi Prakash, Pratik Sehajpal-Akasa Singh and more – contestants who raised brows with their romance – view pics

Rashami Desai was a part of Bigg Boss 13 as well along with Sidharth Shukla, Shehnaaz Gill, Asim Riaz and others. She had made it to the top 5 of show, however, she could not win. Rashami entered Bigg Boss 15 as a wild card contestant along with Devoleena Bhattacharjee, Abhijit Bichukale and others. She is the only one from the wild card contestants who managed to make it to the top 6. Now it remains to be seen who lifts the trophy from the remaining five. Also Read – Bigg Boss 15: Rhea Chakraborty, Surbhi Chandna and 8 more celebs who refused to do be part of Salman Khan’s show – view pics