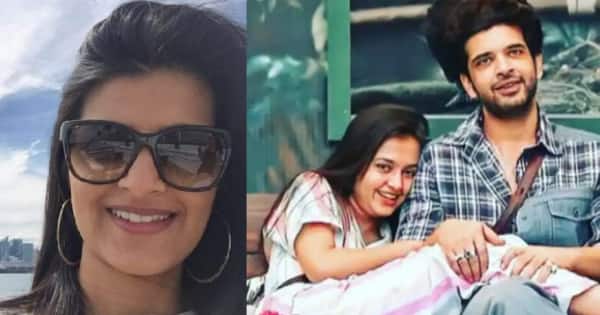 Bigg Boss 15 contestant Karan Kundrra’s sister is supporting him all the way from the US. The doting sister recently opened up on Tejran bond and fights in an interview with Etimes. Bigg Boss 15 season has been the dullest season so far. Only a handful of contestants have kept the audience hooked to Salman Khan‘s controversial reality TV show and the game. And some of the few contestants are Karan Kundrra, Tejasswi Prakash, Umar Riaz, Pratik Sehajpal to name a few. Lately, Karan and Tejasswi have been at loggerheads and quite a lot. The two have been fighting with each other due to various reasons. Karan’s sister Meenu has been tweeting out in support of Karan. She has also slammed Tejasswi for her behaviour towards Karan. Also Read – Bigg Boss 15: Aly Goni comes in support of Umar Riaz; says, ‘As insaan mujhe bura lag raha hai’ – watch video

The doting sister wants Tejasswi Prakash to sit down and understand Karan’s personality instead of harassing him. Reacting to Karan’s fight with Tejasswi due to Rashami Desai and Shamita Shetty, Meenu Kundrra feels Tejasswi’s behaviour is “definitely over-possessiveness.” She added that it stems from certain insecurities. Meenu added that even she could feel the same way if her love interest is giving attention to someone else. However, she did defend her brother saying that Karan loves to form bonds with people. Meenu stressed that as a girlfriend, the Swaragini actress should have seen it. Also Read – Bigg Boss 15: ‘Unstoppable Karan’ trends as Salman Khan corners Karan Kundrra about his equation with Tejasswi Prakash and Umar Riaz – read tweets

Meenu feels that Tejasswi is holding Karan back and wishes that Teja lets him be. Karan’s sister told ETimes, “Meenu: Love the guy for what he is. Don’t try to change him. If you try that, I can see the agitation on his face; we are siblings. Tejasswi should sit down and understand Karan’s personality, instead of harassing him.” Meenu also extended her support to Shamita Shetty, Rashami Desai and expressed her disappointment on Umar Riaz’s reported eviction. Also Read – Bigg Boss 15, Weekend Ka Vaar, Live Updates: Salman Khan lashes out at Karan, holds up mirror to Tejasswi