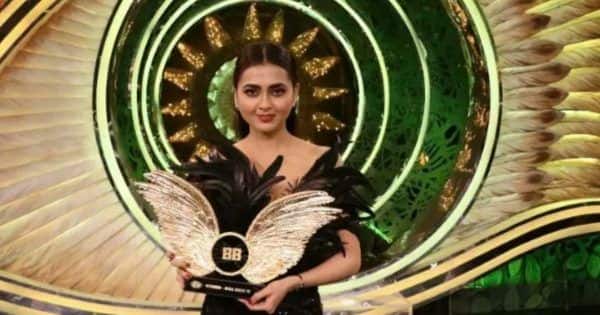 Bigg Boss 15 came to an end yesterday. Tejasswi Prakash emerged as the winner while Pratik Pratik Sehajpal was the runner up. Karan Kundrra ended up 3rd. Now Tejasswi winning the show has raised many eyebrows. Many celebs and fans are of the opinion that she didn’t deserve to win. Now, in an interview to Bombay Times, the actress has spoken about her victory. She has admitted that people were against her. She has said that when she saw the video of her journey on the show, she realised that there were a lot of times when things were against her. She went on to say that till the end and even when she was on stage, nobody in the studio wanted her to win. She added that till the time she got the trophy in her hand, everyone was hoping that she lost. “However, Ganpati bappa and my followers had other plans. I will always believe that jiske saath koi nahi hota uske saath khuda hota hai,” said Tejasswi. Also Read – Trending TV News Today: Umar Riaz’s father slams Karan Kundrra’s eviction, Anupamaa star Rupali Ganguly becomes the highest-paid ITV actress and more

Many were also of the opinion that she was made the winner of Bigg Boss 15 as she is a part of Naagin 6. “No offense to anyone but I think I was offered Naagin because I was doing a good job on BB. I would have been offered Naagin even if I hadn’t won BB. Meri jeet meri jeet hai, mujhe naagin mila hai isliye mujhe jitaaya nahi hai,” stated Tejasswi. Also Read – Tejasswi Prakash wins Bigg Boss 15 trophy, will be seen in Naagin 6 as well: Fair or Unfair?

She also said that nothing can take away from my win on BB. She said that why it is so difficult for people to believe that there is a person who can bag a show like Naagin and can also be a brilliant player. She stated that people always saw her as a strong contender inside the house. She added, “They can put as much blame as they like on the channel that made them what they are, par aap pehle hi dinn se itna kyu darte the mujhse?” Also Read – Bigg Boss 15: Salman Khan won’t host the next season? The Tiger 3 actor keeps THIS condition

Well, her take seems like a karara jawaab to all those who didn’t want her to win.