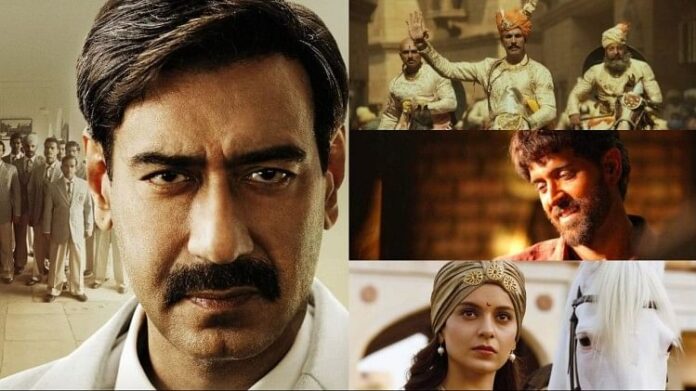 The magic of biopic films has descended on the big screen. The trend of making films on famous personalities that started in Hollywood is no longer going on there too. And, according to those who keep news of cinema around the world, biopic cinema is at the forefront of the category of cinema from which the audience has turned away the fastest in the last three years. This is the reason that producer, director, actor Ajay Devgan has changed the release date of the biopic film ‘Maidan’, which is going to be released before the release of his much-awaited film ‘Bhola’, after ‘Bhola’. It is also discussed that the biopic being made on Veer Savarkar has got stuck. In Hindi cinema too, the percentage of success of biopic films has come down to 10 per cent. Let us tell you the report card of the last 10 famous biopic Hindi films.

Shabaash Mithu, the biopic of cricketer Mithali Raj, has been garnering eyeballs since its inception. Rahul Dholakia wanted its supporting actors to be taken only who seem to be players of Mithali’s team, but the makers of Viacom 18, the company that made it, felt that the audience did not pay much attention to it. Due to this, Rahul left the film, then the producer of the film, Ajit Andhare brought in Srijit Mukherjee, whose feelings about Hindi are well known. Released on July 15, 2022, the box office collection of this film with a budget of Rs 48 crore was not even enough to recover the expenses of its release. The film earned a total of Rs 2.23 crore.

The struggle for the film ‘Rocketry: The Nambi Effect’, based on the life of Nambi Narayanan, a former scientist and aerospace engineer of the Indian Space Research Organisation, also ran for a long time. Viacom 18 refused to release the film after watching it. The film was earlier to be directed by Ananth Mahadevan but then Hero R. Madhavan, who dreamed of making it in Hindi, Tamil and English simultaneously, took over the direction. Madhavan worked very hard for the film. The film turned out to be very good, but the company that released it, UFO, did not promote the film properly in North India. Despite this, the film, made in Rs 25 crore, was successful in earning Rs 50 crore in all the languages.

Read also: Nusrat got injured during the shooting of Chhori 2, shared the video while getting stitches

Akshay Kumar’s film ‘Samrat Prithviraj Chauhan’, directed by Chandra Prakash Dwivedi, was a film that shook the confidence of the audience of Hindi cinema from biopic films. It is said that this film was made in a budget of Rs 300 crore. The film’s total domestic box office collection stood at just Rs 68.05 crore. Apart from Akshay Kumar, Sanjay Dutt, Sonu Sood, Ashutosh Rana and Sakshi Tanwar were in lead roles in the film. This was the debut film of former world beauty Manushi Chhillar. There was also a lot of criticism for tampering with the facts of history in the film.

Amitabh Bachchan played the role of Vijay Barse in Jhund, a biopic on Nagpur-based sports coach Vijay Barse. The film was directed by the same Nagraj Manjule, whose Marathi film ‘Sairat’ was widely discussed in the country and the world. Janhvi Kapoor and Ishaan Khatter’s debut film ‘Dhadk’ was later made on this film. But Nagraj Manjule could not achieve success in his first Hindi film only because people’s interest in biopic films is decreasing day by day. Made in a budget of around Rs 22 crore, the box office collection of this film was only Rs 15.16 crore.