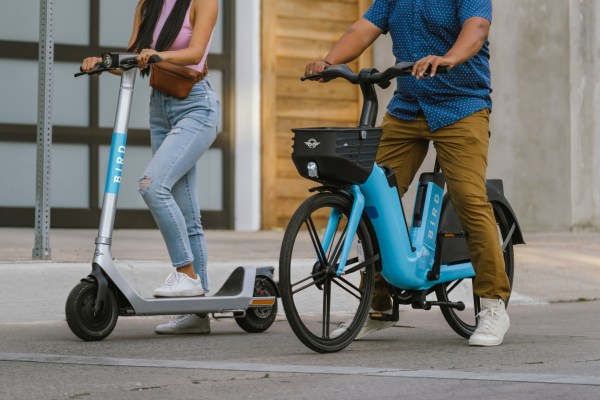 The report was the company’s second public earnings release after finalizing its SPAC deal in November. Since its combination, the company’s value has fallen, mirroring declines seen in other SPAC combinations. Still, the company raised capital and went public, so we now receive regular financial updates regarding its operations.

In the fourth quarter, Bird beat Wall Street revenue expectations, but its guidance fell short of analyst expectations and could come up short when compared to projections listed its SPAC investor presentation. Let’s dig in.

Bird’s full-year revenue of $205 million exceeded expectations of $193.1 million. That was a win for the company. The e-scooter company’s revenue grew 117% from its 2020 total. Naturally 2020 was a year that heavily impacted all mobility-focused startups, so there’s some nuance to the figure, but it is still a strong result.

In a call, Bird emphasized to TechCrunch that its 2021 revenue result was 9% above its SPAC forecast. Full-year adjusted EBITDA for 2021 was -$67 million, which also beat the original SPAC forecast by 30%. Bird had originally anticipated a $96 million adjusted EBITDA loss in 2021.

The company’s fourth quarter, however, was not as impressive as its full-year results. Bird’s top line in Q4 2021 came to $54 million, an increase from its year-ago result, but a decrease from its sequentially preceding quarter, which saw $65.4 million in revenue. Bird’s Q4 revenue did beat Wall Street estimates of $51.37 million, and despite a quarter-to-quarter revenue decline, gross margin at Bird in Q4 was 15%, up from 13.5% in Q3 of the same year.

Most of Bird’s revenue came from vehicle sharing, but revenue from sales of e-bikes expanded. In 2021, product sales made up about $17.8 million of Bird’s revenue, up from $14.7 million in 2020. While that number doesn’t represent massive growth, Bird did see improved economics in its hardware business. The revenue costs of product sales in 2021 were $17.3 million, compared to $22.7 million in 2020, which means the company is getting better at hardware keeping costs down and efficiencies up.

Part of Bird’s overall decrease in Q4 revenue — when compared to its Q3 2021 metrics — is attributable to average rides per vehicle per day dipping in Q4 compared to its full-year metrics. Bird attributes this decline to seasonality, wherein Q4 and Q1 tend to be a little lighter for key mobility metrics due to poor weather and less tourism. COVID, of course, also affected ridership in Q4.

Bird does expect more market recovery in 2022, with cities across the U.S. shedding mask mandates and tourism and commuting expected to make a comeback. The company also noted the rise in gas prices due to the war in Ukraine is expected to account for increased ridership as people look to alternative forms of transportation.

Turning to costs, total operating expenses in the fourth quarter at Bird grew sharply to $136.6 million, up from $40.0 million last quarter. Bird attributes this to $82.3 million of non-cash stock-based compensation expenses, which was triggered by its SPAC combination. Many companies report near-term boosts to share-based compensation costs in the wake of public-market debuts.

Gross margin for 2021 was 19% of revenue, and Bird expects that percentage to march forward into the 20s over time.

In the wake of its better-than-expected Q4 2021 revenue result, and lower-than-promised full-year adjusted EBITDA losses, you might be surprised to learn that Bird’s stock is down in after-hours trading. Why the declines? Guidance, it appears.

Bird expects revenue in the first quarter of this year to land between $34 million and $36 million. Investors had estimated $49.0 million for Q1 2022, according to Yahoo Finance averages. For the full year, Bird expects revenues of $350 million, an uninspiring estimate given the company’s previous $401 million target as laid out in its SPAC deck.

Bird forecast its 2022 with flat utilization when compared to its 2021 results, rather than modeling continued recovery from COVID and continued return to work and tourism, the company told TechCrunch. The company also argued that hitting $350 million would still be a healthy 70% YOY growth rate from 2021’s $205 million. (We note here that $401 million in revenue would represent even faster growth!)

Bird says that despite challenges, it’s been profitable by some metrics in each quarter. The question remains, will it be able to maintain a sustainable business and reach long-term, GAAP profitability?

Does Bird have wings?

Bird’s earnings release claims the company is present in 400 cities globally, a footprint that could give it the type of reach it will need to become fully profitable. Bird started operating a scooter-share in New York City in August, which it says has been successful and will lead the city to double Bird’s service area this summer. That in turn will lead to Bird’s doubling its fleet size in the city, Travis VanderZanden, founder and CEO of Bird, said during Tuesday’s earnings call. Existing large markets like Washington D.C. and Marseille, France also renewed their e-scooter programs over the course of 2021 the company said.

VanderZanden said Bird had entered 250 cities with populations of fewer than 500,000 in 2021 through its fleet manager operating model, which involves scooter fleets being handed over to third party operators and has been a steady revenue driver for Bird.

“Despite the seasonal impact on our top line, this model is a key differentiator for Bird both due to the profitability focus as well as the operational efficiency we unlock with each partner managing about 100 vehicles on average. In fact, our pipeline for logistics partners remains robust even as we continue to elevate our expectations. As we look ahead, we will continue to optimise and develop our fleet manager programme including further investment in the technology platforms our partners use to manage their operations,” the CEO said.

Bird’s ride-profit margin before vehicle depreciation increased to 49% in 2021 from 20% in 2020, and Bird tells TechCrunch there’s room to move that number further as gross profit increases, saying that both Bird and the fleet managers see more profits when utilization increases, which will lead to a rise in those percentages.

Bird is counting on vehicle innovation to drive profits, as well. The Bird Three, a new scooter with a bigger battery and longer shelf life that started hitting streets in summer of 2021, has accounted for higher utilization rates than other models, which could be attributed to the novelty factor that new hardware brings. But Bird says its new scooter has sustained higher rates of use throughout its launch because it’s simply a great ride. It’s also much easier to repair and damage vectors are way down in the deployment of the vehicles, which could provide a boost to some of the company’s profit metrics. At the end of 2021, the Bird Three accounted for 40% of Bird’s overall fleet, but the company is expecting the vehicle to make up for most of its fleet by end of year.

The good thing about having the previous models still on the streets, though, is that Bird continues to repair them and get them back on the road. There’s a balance here because the Bird Three outperforms those new vehicles, but it carries the total depreciation charge, whereas those older vehicles effectively give Bird free rides because they’re already fully depreciated.

To continue to drive ridership, Bird will be focusing on hitting the use case of longer rides by deploying more of its Bird Bikes for sharing. It will also expand its smart bikeshare program, wherein it brings local bikeshares onto its app in the hopes that this will encourage greater mode shift, which might ultimately reflect back on Bird.

How much more growth will the startup need to get closer to profitability? The fourth quarter revenues of $54 million generated gross profits of $8.2 million, down from $13.5 million in Q3 2021. The figure shows an improvement on the -$2 million gross profits of a year ago, when the first COVID winter was upon us, but it’s still far and away from the $136.6 million in operating costs in the quarter, a gap that was, in all fairness, expected to widen last quarter.

Bird tells TechCrunch that it’s laser focused on its core sharing business and is chugging along toward profitability. Overall YOY growth is still trending upward, and if those headwinds really have turned into tailwinds, Bird might make its conservative full-year guidance estimates after all.