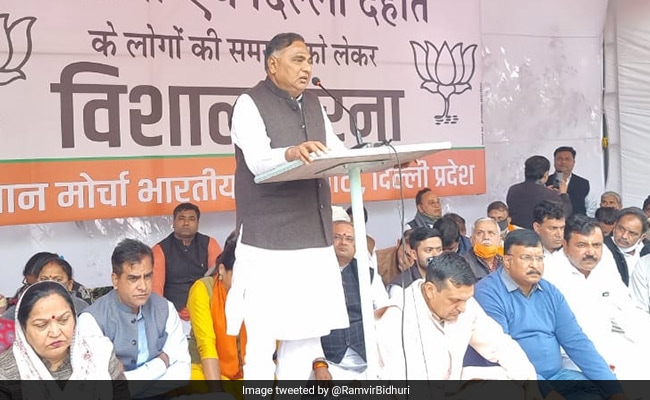 Delhi BJP on Wednesday staged a protest outside Chief Minister Arvind Kejriwal’s residence over alleged non-fulfilment of farm demands by the AAP government, claiming that the farmers are being subjected to injustice in the national capital.

Speaking at the protest, Leader of Opposition in Delhi Assembly Ranvir Singh Bidhuri said that Mr Kejriwal had made several big promises to farmers before coming to power, none of them has been fulfilled. The protest, in support of 12-point demands, was joined by hundreds of farmers from rural areas of Delhi, said the Delhi BJP. Delhi BJP Kisan Morcha president Vinod Sehrawat also attended the protest.

Mr Bidhuri said Kejriwal promised free electricity for irrigation to the Delhi farmers but no free power has been provided to them.

“In a way, the government is stopping farmers. The Kejriwal government prevents farmers from installing tube well in his farms. If they somehow get the tube well installed, an electricity connection is not provided. The farmers are subjected to this kind of injustice and crime,” he said. He also claimed that Kejriwal government did not fulfil its promise of increasing Lal Dora.

“He promised to increase Lal Dora but so far nothing has happened in this regard,” the BJP leader insisted.

Mr Bidhuri said the compensation for the acquisition of farmers’ land should be increased to Rs 10 crores per acre.

The BJP leader also claimed that the farmers have been demanding the removal of tractors from the category of commercial vehicles for a long time.

He claimed that the names of the heirs of the farmers who died were not being recorded in the records of the revenue department.