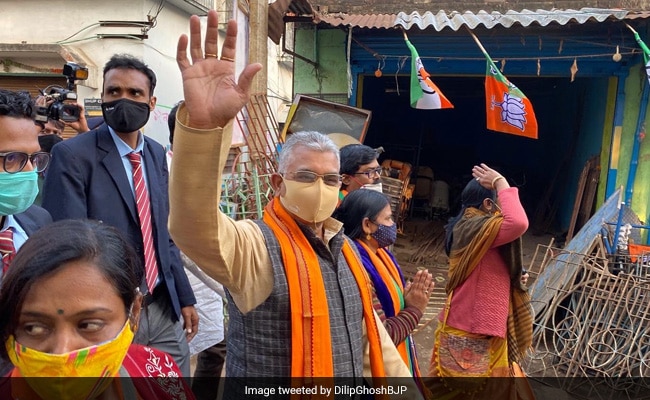 Bengal civic polls campaigning: Dilip Ghosh said only four people were with him and the rest were locals.

BJP national vice-president Dilip Ghosh was on Saturday stopped by the police from campaigning for his party candidate at a ward in Bidhannagar for allegedly flouting COVID-related code of conduct for municipal elections.

A police officer said Mr Ghosh was campaigning with more than 50 people in Jagatpur Bazar area in ward number 20 of Bidhannagar, in violation of State Election Commission’s directions to limit the number of campaigners at a time to just five.

The officer also said Mr Ghosh had started an argument when pointed out about the norm violation.

The BJP leader, however, claimed that the police was enforcing SEC rules only on the members of his party. He also stated that just four people were accompanying him, and the rest were locals who had come to meet him.

“If we cannot hold campaigns what is the point of this election? I had just four people with me. The rest were locals who came to meet me,” Mr Ghosh insisted.

Trinamool state spokesperson Kunal Ghosh, when approached, claimed that the senior BJP leader had in the past, too, violated COVID protocols while electioneering in Asansol.

“Everyone remembers how the Trinamool was prevented from campaigning during Agartala Municipal Corporation polls (in Tripura) last year. So Dilip Ghosh should stop talking,” the Trinamool leader said.

Elections to Bidhannagar Municipal Corporation along with three other civic bodies are scheduled to be held on February 12.